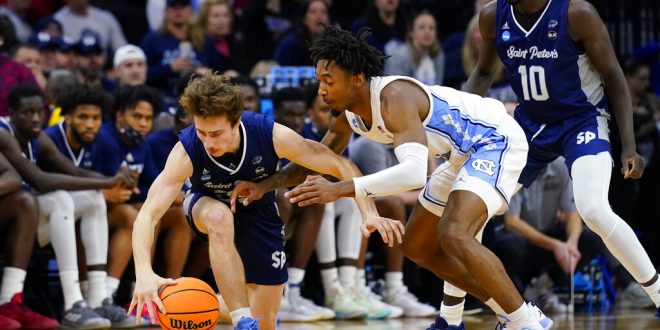 St. Peter's Doug Edert, left, and North Carolina's Leaky Black battle for a loose ball during the first half of a college basketball game in the Elite 8 round of the NCAA tournament, Sunday, March 27, 2022, in Philadelphia. (AP Photo/Matt Rourke)

For the first time in program history, the Peacocks landed a spot in the top 25 USA Today Sports Coaches Poll and made a historic run in the NCAA Elite Eight as a No. 15 seed. After coach Shaheen Holloway left Saint Peter’s to become the head coach at Seton Hall, is when the decisions came in.

A closer look at the transfers

While Edert was a surprise coming off the bench, Banks and Lee have been starting all season.

Edert produced three straight double-digit scoring games, including a 20-point performance against Kentucky. Averaging almost 10 points per game, he was a top scorer on the Peacocks this season. With a shooting career percentage of 39.2, he should have no problem moving up to another team in the NCAA. After his debut in the March Madness Tournament, he turned the attention he was receiving into a name, image and likeness deal with Buffalo Wild Wings.

Banks has two years of eligibility remaining and was the leading scorer for the Peacocks this past season. He averaged 11.3 points, including a 27-point outburst against Kentucky including five three-pointers. Not only was he also a top defender, but also has a free throw percentage of 85.9% for the 2021-22 season.

Lee, who averaged 75 ppg has started 25 games for Saint Peters. His best game was in the NCAA tournament against the Murray State Racers, as he reached a high of nine points during that game- along with four assists. Lee has two years of eligibility remaining going into the portal.

With the Peacocks being one of the biggest talks of March Madness, it will be interesting to see where these players plan on going.