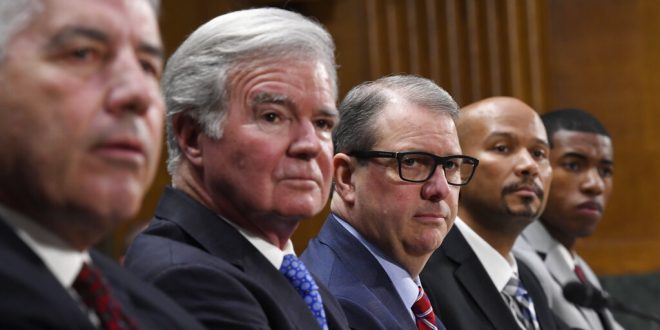 The Big 12 released a statement on Tuesday afternoon stating that Bob Bowlsby will step down from the role of Big 12 commissioner later in 2022.

In the statement from the Big 12, after leaving his position Bowlsby starts transitioning to new interim role within the conference.

Before stepping into this role, he held leadership positions within college sports for more than 40 years. He spent seven years at Northern Iowa as an athletic athletic director, 15 years at Iowa and right before becoming commissioner he worked at Stanford for six years.

In 2012, the Big 12 made the decision to hire him after Dan Beebe stepped down.

As commissioner, Bowlsby wanted to create a partnership with ESPN and FOX Sports. His drive for this partnership resulted in a 12-year comprehensive media contract with both companies. Later in 2019, he helped with expanding the Big 12’s media coverage to ESPN+ where it now has Big 12 Now. On this program, fan can access a variety of Big 12 sporting events.

In addition to making a bigger media presence for the conference, Bowlsby played a part in the formation of the College Football Playoff. His leadership also brought back the Big 12 Football Championship Game in 2017.

Changes within the conference

In the summer of 2021, Texas and Oklahoma announced that they will be departing for the Big 12 to join the SEC. The SEC presidents and chancellors conducted a vote on extending an invitation to both schools and the vote came out unanimous. By 2025, both schools will be members of the SEC.

This past season Cincinnati made it to the College Football playoffs, even though it lost to Alabama. This gave the school a chance to prove itself and it belonged in a bigger conference.

After spending 10 years with the conference, Bowlsby decided to step down as commissioner. College sports has evolved in his tenure and issues come and go. However, the issues that college sports experience influenced him in his choice to leave his position.

“After more than 40 years of serving in leadership roles in intercollegiate athletics, including the last 10 with the Big 12, and given the major issues that college sports in general and the Big 12 specifically will address in the next several years, I have reached a natural transition point in my tenure as Commissioner, as well as in my career” Bowlsby said.

Bob Bowlsby reflects on the end of his Big 12 tenure to @dwil and @CFBHeather: "There's never a time when there's no issues. And so this seems like a reasonable time to hand it off to somebody else." https://t.co/AIvRWBXU4P

Schools of the Big 12 released statements about Bowlsby decision. They reflected on his time as commissioner and the help they gained from him.

In the Big 12’s statement, an extensive national search will be conducted. Interviews for a new commissioner start within the next few weeks.

The Big 12 wants to have a new commissioner in place in 90 days, Texas Tech president and board chair Lawrence Schovanec told @TheAthletic.