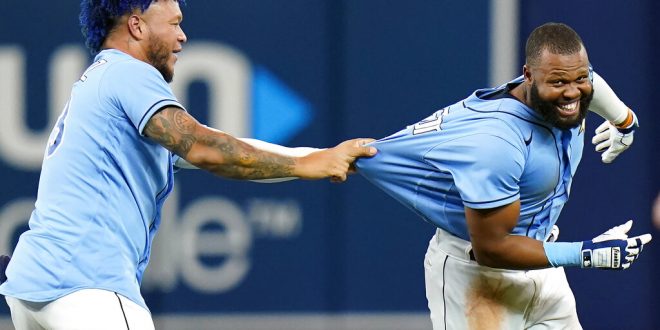 The Tampa Bay Rays Win 9-8 Against The Oakland Athletics

The Tampa Bay Rays won game-two of four in their series against the Oakland Athletics in a 9-8 walk-off Tuesday night. The series is tied 1-1.

Manuel Margot hit a game-ending single during Tampa Bay’s two-run 10th inning, to secure the win for the Rays.

A great night at the Trop

For just the 28th time in modern baseball, two rookie starting pitchers faced off against each other in a MLB game.

The opposing starter Adam Oller made his major-league debut as well.  He gave up five runs on five hits and three walks over 1 1/3 innings.

.@tommyr55 gets the ball tonight in his @MLB debut pic.twitter.com/tnNwL8Lxtn

Rookie pitcher Romero walked both Tony Kemp and Elvis Andrus in the first inning.  Then, Jed Lowrie had a homerun that put the A’s up 3-0.

Tampa Bay answered back in the bottom of the inning with a home run from Brandon Lowe, a walk to Ji-Man Choi and a double from Randy Arozarena. Choi and Arozarena were left on base heading into the second 3-1.

In the top of the second, Sheldon Neuse walked, Kemp hit a single and Andrus walked, ending the night for Romero.

To start the second, Mike Zunino hit a double. Then, Taylor Walls had a single bringing Zunino home. Choi hit a three-run home run giving the Rays the lead 5-3 and chasing Oller from the game.

Moving to the fourth, Brooks Raley was the man on the mound for the Rays. He allowed only a single to Stephan Piscotty.

The Rays still maintained the lead at the end of the inning.

In the bottom of the seventh Walls hit a double to deep center with one out. Pitcher Wander Franco drew a two-out walk to leave it up to Yandy Diaz. The game went into extra innings tied 7-7.

Moving to the tenth and final inning, Franco tied things up with a double to score Lowe, and then with two outs Margot hit a single to score Franco.

The Tampa Bay Rays and Athletics play game three Wednesday at 6:40 p.m. Frankie Montas will be on the mound for Oakland, and Shane McClanahan will start for the Rays.