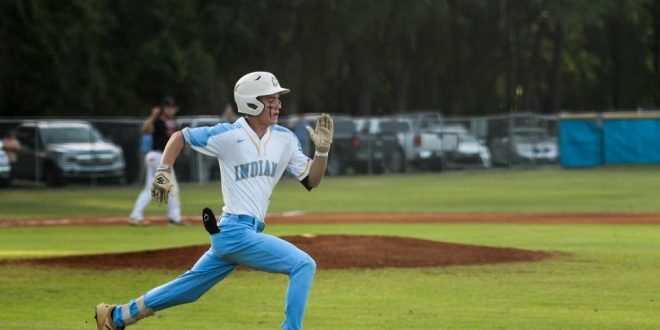 An Offensive Sweep At Chiefland

The Chiefland Indians baseball team played the Trenton Tigers at home on Tuesday and came out on top 7-1.

Starting on the mound, lefty Tyler Bass set the tone for the Indians right off the bat, striking out the first two batters of the game. Left fielder Colton Brown made a clean catch to lead the Indians to their first attempt at the plate.

Right away, leadoff hitter Trey Meeks showcases his speed with the first hit of the game, followed by a sacrifice bunt by Taylor Brown, giving Trenton an idea of what is to come from Meeks, top-scorer for the Indians.

At the top of the second, Bass cleans up quick limiting the Tigers to a groundout and two pop-outs, leading the Indians into their first offensive rally of the evening. With two strikes on him, Braysen Jernigan singles to right and Braden Smith walks right after, the two eventually scoring for the Indians due to an RBI from Colton Brown and Reece Emmons, going into the third inning up 2-0.

The fourth and fifth innings were neck and neck, with both the Indians and the Tigers defending a 3-up-3-down lineup in both innings. This did not last long as Chiefland kicked it into high gear with aggressive baserunning and clutch hits in the sixth. Wade Gore initiates the inning, singling to left. It was Devon Minichello though, that took his place on the base paths and stole the momentum for the Indians.

Drawing the throw from Trenton pitcher Colby Wilson five consecutive times, Minichello takes advantage of error with persistency. He stole second, third, and eventually makes it to home giving the Indians a 3-0 lead over the Tigers. Jernigan feeds off of this energy as he works the count full, walks, and then steals second and third base for Chiefland. Colton Brown takes one for the team, hit by a pitch but getting first base, making way for Emmons to steal the show.

Reece Emmons singles to center, scoring both Jernigan and Brown, giving the Indians a 5-0 advantage. The rally continues as Meeks singles and Taylor Brown loads the bases, a key player to have on the basepaths as he leads the team in stolen bases. The game broke open once Seth Campbell hit a deep fly ball to right field, scoring Emmons and making way for Junior Brown’s RBI to shortstop, scoring Meeks. The Chiefland Indians head into the 7th inning dominating the Trenton Tigers 7-0.

Though Bass struggled to finish strong at the top of the seventh, catcher Reece Emmons had his back, throwing out two attempted stolen bases at third base. The Indians only allowed the Tigers to cross the plate once, finalizing the score at 7-1 prior to the bottom of the seventh.

Finishing their last district game of the season, Chiefland will take on Bradford High School at 6:30pm on April 18, away from home for one of five of their last non-district games.