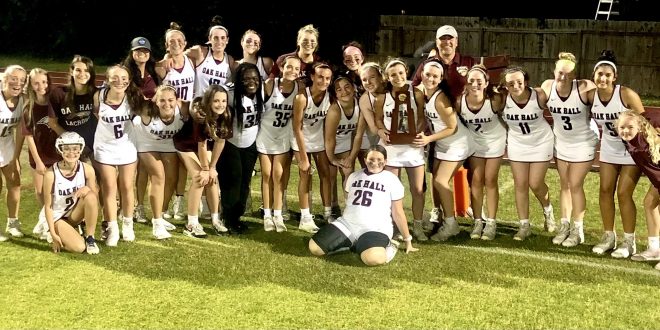 The Santa Fe girls lacrosse team faced off against the Oak Hall Eagles with hopes of capturing the 1A District 4 title. From the first draw, the Eagles took control of the matchup, posting a 20-3 victory over the Raiders.

The Raiders are making their first ever district championship appearance. Listen to Coach Kayla Cromwell’s words of advice for her team heading into the matchup. @SantaFeGirlsLax @athletics_hall @ESPNGainesville @GNVPreps @ThePrepZone pic.twitter.com/itIZjiACMm

Oak Hall’s trio of freshmen, Harper Johnson, Sarah Miller and Leila Sims, led the way for the Eagles throughout the entire matchup. Johnson struck first with a goal less than 30 seconds into the game. Shortly after, Miller found the back of the net for another Oak Hall goal. Sims followed that up with a free position shot.

Leila Sims tallies another goal for the Eagles

The Eagles not only knew how to score but also showcased elite field vision, allowing them to find open teammates. Sophomore Sophia Moreschi led the team with 4 assists, contributing to Oak Hall’s 13 total assists against Santa Fe.

The Eagles opened the first half with 14 unanswered goals. With 2:25 left in the first half, Santa Fe’s Hallie Morgan scored the Raiders’ first goal of the night.

The Raiders had limited chances to score due to the Eagles’ ability to maintain possession of the ball throughout the game.

As soon as the second half began, Oak Hall kept its foot on the gas pedal. Johnson, Miller and Moreschi scored quick goals to extend the Eagles’ lead to 19-1.

The Raiders saw a quick spark of offense with goals from Emma Maroon and Faith Marquis. However, it wouldn’t be enough to match the Eagles’ remarkable ability to score.

Miller buried a final goal for the Eagles to cap off a stellar 20-3 victory and claim the district championship trophy for the first time since 2018.

Cromwell Proud of the Raiders

Claiming the district runner-up trophy was a historic moment for the Santa Fe girls lacrosse program. Cromwell speaks on the Raiders’ relentless fight in the matchup.

Road to the State Championship

Now that the Eagles have captured the district crown, they will compete in the regional quarterfinal game on April 19 at 7 p.m. Oak Hall’s opponent is to be determined.

Oak Hall Coach Darren Johnson said the three keys to advancing in the state playoffs are to move the ball quicker, work on defense, and play at a fast pace.

Shailey Klein is a first-year journalism major specializing in sports and media at UF.
@shaileyklein
Previous JT Daniels leaves Georgia
Next Ace On And Off The Field: How Troy Freeman Has Found A Home With Oak Hall Baseball