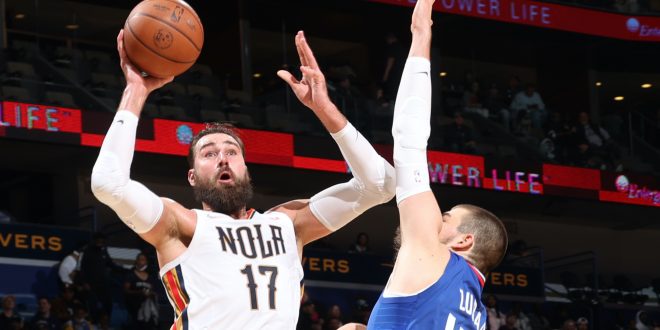 Jonas Valanciunas of the New Orleans Pelicans in action against the LA Clippers. (Photo by Ned Dishman/NBAE via Getty Images)

With one more western conference playoff spot up for grabs, the New Orleans Pelicans travel to face the Los Angeles Clippers in the last NBA playoff play-in game.

Pelicans looking to build on something special

The Pelicans enter the end-of-season matchup with a record of 36-46. The team is coming off a big home win against San Antonio and looking to ride that momentum into Los Angeles.

Clippers hoping to sneak into the playoffs

The LA Clippers come into tonight’s matchup with a record of 42-40, keeping them above .500 by two games. Although they came into the Play-In tournament on a five-game win streak, the Clippers lost a tight game to the Minnesota Timberwolves for the seventh seed.

With star Paul George testing positive for COVID-19 and Kawhi Leonard still out, The Clippers will have to continue to rely on their role players to carry them to a win. Guard Luke Kennard is still on day-to-day status, so getting his three-point expertise back could be huge for LA.

The Clippers are betting favorites at -190, -4, and ESPN’s Basketball Power Index gives the California team a 72.8% chance to win. Despite the injuries, the Clippers are much better suited to face New Orleans’ conventional defense. Expect the Clippers to shoot much more efficiently and push tempo quickly.

Don’t count the Pelicans out all that quickly though. New Orleans won three of their four matchups versus LA this season. With George out, the Pelicans can take advantage and win the game. The key to success will be containing LA’s role players. Limiting the contributions of Reggie Jackson or Ivica Zubac will be critical for the Pelicans.