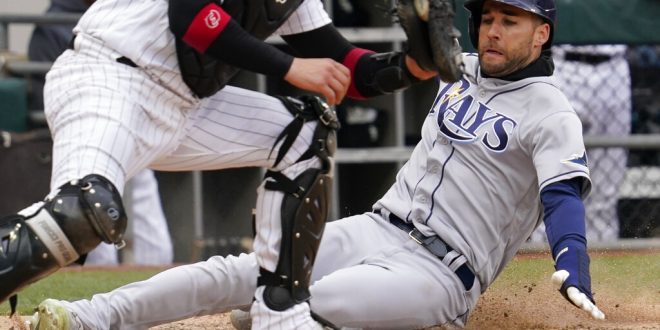 The Tampa Bay Rays lost the weekend series to the Chicago White Sox.

The Tampa Bay Rays headed to Guaranteed Rate Field for a three-game series matchup against the White Sox.

On Friday, to start off the series matchup and celebrate Jackie Robinson Day, the Rays fell short to Chicago. With a wild pitch by Rays Drew Rasmussen in the bottom of the second. Gavin Sheets scored giving the Sox the lead of the game. The Sox then added another run in the bottom of the third with a homer by Jake Burger. The team continued to add onto the scoreboard in the bottom of the fifth with a line drive. The Rays responded in the top of the sixth with two doubles putting up two runs for the Rays in the top of the sixth. While the team started a late rally in the sixth the bats stayed silent the next couple of inning giving the White Sox the 3-2 win over the team.

On Saturday, Tampa fell short to the White Sox again in the second game of their three-game series matchup. While they started the game with a lead in the first inning with a sacrifice fly by Harold Ramirez and Brandon Lowe scored. The White Sox didn’t stay quiet for long putting up two runs in the bottom of the fourth. The Rays then responded in the top of the sixth with a single by Manuel Margot, leading Wander Franco to score as Tampa tied the game. That didn’t last for long with the White Sox scoring in the bottom of the sixth taking the lead of the game. The bats stayed silent on both sides for the rest of the game. The White Sox won again with a final score of 3-2 taking the series win over Tampa.

One left on the south side this weekend pic.twitter.com/4WX2AEHGWW

While the Rays lost the first two games they dominated in the last with a final score of 9-3. In the first inning, the Rays put up four runs to get the game started. The White Sox then responded in the bottom of the fourth inning with one run scored. The Sox continued to add to the scoreboard in the bottom of the fifth with another run. The next couple of inning were quiet on both sides until the top of the eighth when the Rays scored four more runs making the score 8-2. The Rays then added another run in the top of the ninth. The White Sox then respond with a homer by Gavin Sheets but it wasn’t enough for the team. The Rays take the win with a final score of 9-3.

The Rays will head into a three-game series against the Chicago Cubs tonight. The first pitch is scheduled at 7:40 p.m.. Shane McClanahan is on the mound for the Rays and Kyle Hendricks for the Cubs. The Cubs are currently 5-4 this season and third in the NL Central. The team is currently 5-5 this season and are currently tied with the Yankees for third in the AL East. On Tuesday the game is at 7:40 p.m. with the Rays pitcher TBD and Justin Steele on the field for the Cubs. For Wednesday the game is at 7:40 p.m. with Drew Rasmussen on the field for the Rays and Marcus Stroman for the Cubs.