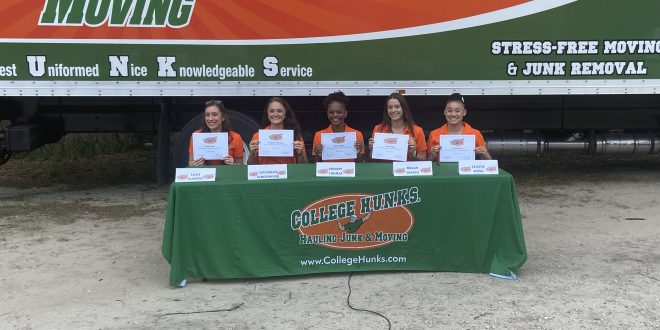 This Monday afternoon, five Gators Gymnastics athletes start a new journey in their careers by signing a NIL deal with College Hunks Moving Company. The specifics of the deal have yet to be released.

With these signings under their belts, College Hunks shifted their focus toward the Gators Gymnastics team. Five gymnasts were chosen to represent their team: Leah Clapper, Savannah Schoenherr, Trinity Thomas, Megan Skaggs and Leanne Wong.

Leah Clapper, a senior from Ann Arbor, Michigan, has spent all four years as a Gator, putting up amazing numbers in all events. Clapper won the award for Gators Gymnastics’ Graduate Scholar-Athlete of the Year as well as Southeastern Conference Academic Honor Roll.

Coming off of a 31-1-1 season, Leah Clapper talks about the future beyond gymnastics that this deal will provide.

As one of the most valued competitors on the team, Trinity Thomas’ season was nothing short of incredible. Thomas is the nation’s only gymnast with All-America first-team honors for each event in the 2022 Women’s Collegiate Gymnastics Association (WCGA) regular-season awards. In addition to a NIL deal, Thomas was chosen for the 2022 Honda Sports Award, the sixth for the Gators.

Trinity Thomas talks about what this deal means to her and her teammates.

This partnership is monumental for the Gators, and can potentially open the door for other student-athletes to sign NIL deals with College Hunks.

Leah Clapper explains her excitement for the new partnership.