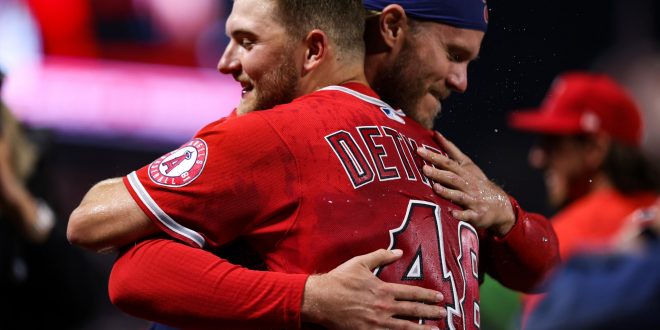 Los Angeles Angels rookie pitcher Reid Detmers becomes the youngest player in franchise history to throw a no-hitter after a game against the Tampa Bay Rays on May 10, 2022. (Photo from @Angels on Twitter)

22-year-old rookie Reid Detmers put on a show and made history as he became the youngest Angels player to throw a no-hitter in Tuesday night’s game against the Tampa Bay Rays. All of the 27 outs came from the arm of Detmers. This historic moment was extremely special to Detmers. “Getting the last out, that’s just something I’ve dreamed of ever since I was a little kid. I didn’t think it’d ever happen,” he said.

This game was Detmers’ 11th career MLB start. He threw 108 pitches, had just two strikeouts, and walked only one batter. Detmers’ accomplishments resulted in the Angels’ 12th no-hitter in franchise history. The most recent no-hitter occurred on July 12, 2019, when Taylor Cole and Felix Pena combined for a no-hitter against the Seattle Mariners. He is also the youngest player in franchise history to obtain this feat and is the second lefty, as the first lefty was Clyde Wright, who recorded a no-hitter on July 3, 1970.

Currently, the Angels have had back-to-back wins against the Rays. The game prior resulted in the end score being 3-12. However, this game, in particular, ended with the Angels dominating the Rays as the end score was 0-12. This historic game was exciting for Angels fans as it took place at the Angel Stadium of Anaheim. Angels fans jumped out of their seats, celebrating Detmers’ career-high moment. Detmers’ teammate Mike Trout even shouted him out on Twitter to celebrate this career milestone.

The Angels dominate the AL West as they are first in the standings with 21 wins and 11 losses. Despite the Rays’ current struggle, they are still ranked second in the AL East. The Rays currently have 18 wins and 13 losses.

The Angels hope to continue their two-game winning streak as they take on the Rays in their home field tonight at 7:07 p.m. for game three of the series.