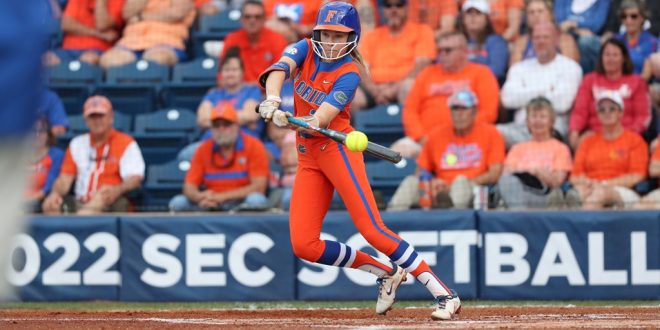 Florida Gators Softball faces off against perhaps their most difficult opponent of the season – the Arkansas Razorbacks.

When these two teams last met, the Razorbacks swept the Gators 3-0. They were outscored 5-16.

What went wrong in April?

In Game one, the Gators were able to keep things close through four innings, but slipped up in the fifth. They allowed five runs in the fifth, and another four in the sixth. In response, Florida was only able to score one run.

In Games two and three, things were a lot closer.

The game saw both teams put runs on the board early, with Florida taking an early 3-1 lead after the first inning. Arkansas came steaming back however, and equalized things in the third. Tied at four runs in the, Arkansas was able to edge the Gators just enough to win 5-4.

Game three was much quieter, with Arkansas only scraping a run in the second, and one more late in the sixth.

Gators Softball Need To Get The Bats Going

If Gators Softball are to defeat the Razorbacks, they need to sure up a few things.

First, the Gators will need to get the bats going.

Along with being outscored that series, the Gators were also outhit 22-12.

The offense needs to show up big, as the Razorbacks offense, is heating up.

Put A Stop To The Razorbacks Offense

While easier said then done, the Gators will need to put a stop to the Razorbacks offense. In their previous matchup against Ole Miss, Arkansas outfielder Linnie Malkin homered into Razorback history, setting the program record at 48.

Also leading the Razorbacks offense is KB Sides, batting .453. The Gators pitching has their work cut out for them, but it’s not impossible.

For All The Marbles

The winner of this matchup will go on to face the winner of Tennessee and Missouri in the finals of the SEC Tournament. Florida is nearing the finish line, and look to end on a high note.

Matthew Bell is a senior at the University of Florida. He completed his associates degree at State College of Florida in Bradenton and transferred to UF in 2019. His favorite sports are American football and baseball.
@@write_matthew
Previous Taking A Look At Former Florida Gators In The MLB
Next Gators Baseball Rides Five Game Win Streak into Missouri