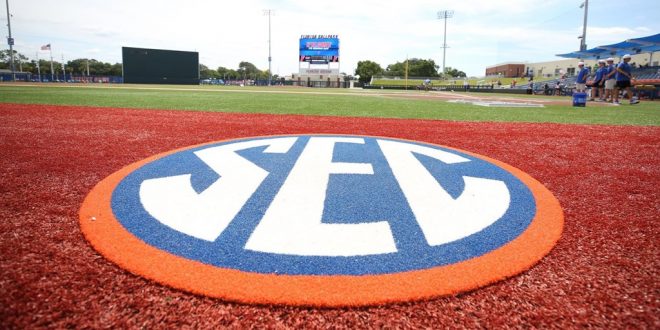 A view of Condron Ballpark. Photo by Anissa Dimilta courtesy of FloridaGators.com.

The 2022 SEC Baseball Tournament is being held in Hoover, Alabama at the Hoover Metropolitan Stadium May 24-29. No. 7 seed Florida Gators will play their first game of the tournament against No. 10 seed South Carolina Gamecocks Tuesday, May 24. The winner of this game will move on to play the No. 2 seed Texas A&M Aggies Wednesday, May 25.

Recent Series Against the Gamecocks

Last Thursday, the Gators hosted the Gamecocks in a 3 game series, ending 2-1 for the Gators.

In the first game of the series, the Gators blew the Gamecocks out of the water, racking up a score of 14-5.

Sophomore Brandon Sproat started on the mound for the Gators, and held the Gamecocks scoreless for two innings. South Carolina still managed to take the lead at the top of the third, and loaded the bases on two hit-by-pitches and a walk. Andrew Eyster brought in two runs for the Gamecocks with an RBI double to left field. Florida answered, tying the game 2-2 with back-to-back doubles in the bottom of the third from Sterlin Thompson and Jud Fabian. The Gators then took the lead at the bottom of the fourth with a homerun from Ty Evans, followed by a Thompson fly to left field, allowing Kris Armstrong to score. This pushed the Gators lead to 4-2.

The Gamecocks managed to tie it up again at the top of the fifth, scoring a run on Josh Rivera‘s shortstop error and doubling on another. Florida’s offense matched the Gamecock’s energy at the bottom of the fifth, coming in hot with three runs from BT Riopelle, Rivera, and Jac Caglianone, pushing the score to 7-4.

The Gators added on seven insurance runs to sail smoothly to a 14-5 victory. Florida had a very impressive offensive performance, with 16 hits leading to 14 runs.

The tournament will be covered on both the SEC Network and ESPN2. The Gators are scheduled to play the Gamecocks at 2 p.m. ET following the No. 6 seed Georgia vs. the No. 11 seed Alabama game at 10:30 a.m.

Previous Lightning Looks to Secure Spot at Conference Finals
Next The Rise of Ruth: Analyzing How Neil Ruth Has Made Himself A Household Name In Oak Hall’s Clubhouse