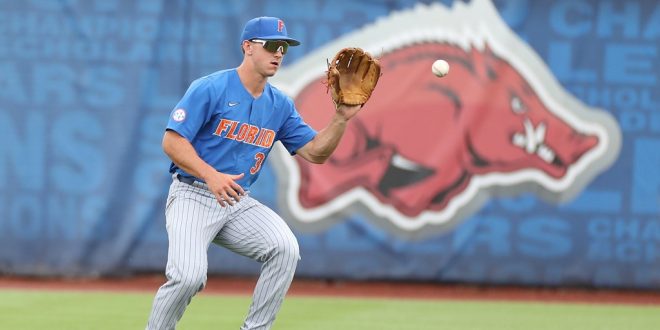 Wyatt Langford makes a catch during Florida's game against the Aggies in the second round of the 2022 SEC Tournament on May 26, 2022. (Photo by Craig Haas/ courtesy of floridagators.com).

Florida Gators baseball was shut out by Texas A&M in the second round of the SEC Tournament on Thursday. The Aggies gained a 10-0 victory after a seven-run sixth inning.

That's a wrap from The Met.

A Bad Day for Florida

Brandon Neely started on the mound for the Gators. The freshman pitcher failed to live up to his impressive performance against South Carolina just a week before. Against the Gamecocks, Neely went seven scoreless innings with 10 strikeouts. However, on Thursday night Neely surrendered three earned runs on six hits and two walks across 4 1/3 frames while only striking out one.

The Gators put up their worst offensive performance. Florida struck out seven times to Texas A&M starter Micah Dallas. Wyatt Langford came close to hitting a leadoff bomb to begin the game. Unfortunately for the Gators, Jordan Thompson managed to catch the ball after slamming into the centerfield wall. Throughout the remainder of the game, the Gators struggled at the plate, recording just one hit with a Jac Caglianone single in the second.

After a quiet first two innings, Trevor Werner hit a two-run homer in the bottom of the third securing a 2-0 lead for the Aggies. Texas A&M extended its lead to 3-0 in the fifth when Kole Kaler crossed home on an RBI single from Jack Moss. The Gators responded by sending in Fisher Jameson to replace Neely on the mound. Jameson got the final out of the frame as Jud Fabian played elite defense for the Gators catching a pair of flyouts in center field.

Following, the Aggies replaced Dallas with Joseph Menefee in the sixth. Menefee got the save, pitching two scoreless innings with four strikeouts.

The Aggies were explosive in the bottom of the sixth, plating seven more runs. Ryan Targac, Thompson and Austin Bost all connected for home runs, pushing Texas A&M’s advantage to 10-0.

The Aggies have proven to be dangerous in the sixth, outscoring opponents 64-15 in the inning.

The game came to a close at the top of the seventh with a mercy rule. The Aggies opened up SEC Tournament play with a dominating shutout over the Gators.

The Gators are 10-13 all-time against the Aggies, and 9-7 under Head Coach Kevin O’Sullivan. Florida has won eight of its last 12 meetings with A&M. The Gators have won 11 of their last 14 games and 13 of their last 17. Additionally, after the loss to the Aggies, Langford saw his 18-game on-base streak come to an end.

The Gators will take on the Arkansas Razorbacks on Friday at 10:30 a.m. Right-handed pitcher Nick Pogue will start for Florida while Connor Noland will get the start for Arkansas. The Gators went 2-1 against Arkansas during the regular season and will look to gain a win to remain in the tournament.