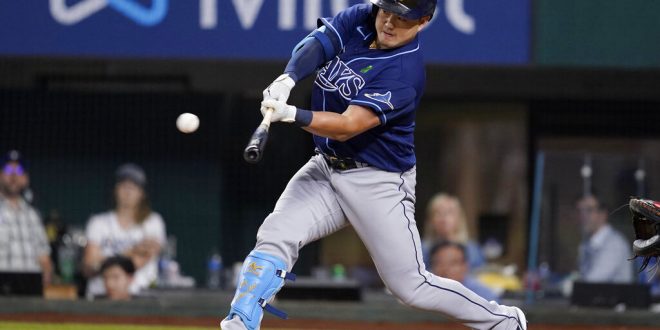 After a 4-3 extra-inning win Wednesday night, the Tampa Bay Rays are looking to split the four-game regular-season series against the Texas Rangers.

Tampa enjoyed another strong start from left-handed pitcher Jeffrey Springs. The starting pitcher threw five innings, allowing five hits, two earned runs, and one walk while striking out seven. Springs was aided by a web-gem from outfielder Brett Philips in the first inning.

(We have nothing to add) pic.twitter.com/k7aAUnGAV7

Since converting to a traditional starting pitcher, Springs has thrived. Over five starts the southpaw has allowed seven earned runs over 25.1 innings. This translates to a 2.49 ERA. He has struck out 26 batters in those starts.

Randy Arozarena hit a solo home run in the seventh inning off of starting pitcher Jon Gray. Harold Ramirez and Vidal Brujan each drove in one run for the Rays. The Rays needed some late-game heroics from Ji-Man Choi to escape with a 4-3 win last night. After a check-swing call that led to Rays manager Kevin Cash’s ejection, Choi laced a go-ahead double in the 11th inning.

Ji-Man didn't need any help putting us back on top in the 11th pic.twitter.com/lsuiZrg2jW

Tampa’s bullpen was strong in the win. The Rays used six different relievers over six innings while allowing one run. Left-hander Colin Poche closed the door for Tampa.

Catcher Sam Huff launched a solo home run into the left-field seats in the second inning. Former Ray Nathaniel Lowe also homered with a solo shot in the fourth. Adolis Garcia drove in the final run for the Rangers. Dennis Santana was credited with the loss.

Rays looking to heat up bats

30 straight Rays batters were retired across two games between Tuesday and Wednesday. Per Rays Tampa Bay Times Reporter Marc Topkin, this matched the third-longest streak in team history. The two longer streaks (34 and 37 batters) included a perfect game. Tampa will be looking to get their bats going in the final game of the series.

The Rays will be looking to get another win before returning from the four-game road trip.  The two teams play Thursday at 2:00 p.m.