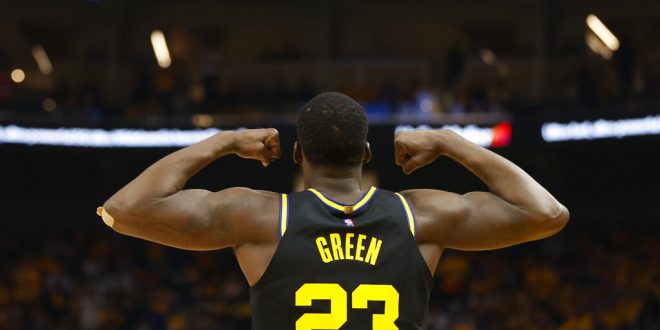 Golden State Warriors' forward Draymond Green gestures after scoring a basket in the second quarter against the Dallas Mavericks in Game 5 of the NBA basketball playoffs Western Conference finals Thursday, May 26, 2022, in San Francisco. (Stephen Lam/San Francisco Chronicle via AP)

Game 1 of The NBA Finals between the Boston Celtics and Golden State Warriors begins Thursday night in The Bay.

The Warriors will be appearing in their sixth finals in eight years after eliminating the Dallas Mavericks handily in six games. Meanwhile, Boston beat the Miami Heat in a tough seven-game series to advance to their first NBA Finals since 2010.

Golden State (12) and Boston (22) trail only the Lakers (32) for the most NBA Finals appearances of all time. However, the team’s only meeting was back in 1964 which saw Boston win in five games en route to their sixth consecutive title.

I think it’s safe to expect a better series this go around.

DPOY: Marcus Smart, the reigning Defensive Player Of The Year, has been dealing with injuries all post-season. His health will be something to monitor all series as he’ll be tasked with menacing three-point marksman, Steph Curry, every chance he gets. In defensive possessions against Curry, Smart has allowed only 30 points on 37 percent from the field and 30 percent from three.

Celtics Length: The Golden State Warriors are often praised for their three-point shooting, even more so after adding baby splash bro, Jordan Poole. The challenge will only get tougher as the Celtics were the NBA’s best defensive team against the three-ball throughout the regular season. With the length on the perimeter the C’s will look to disrupt the often small-ball Warriors, who thrive when playing with pace.

“I think that with who we are defensively against a really good offensive team, the benefit is having Marcus (Smart), Jayson (Tatum), Jaylen (Brown) on the perimeter,” Celtics coach Ime Udoka said. “…it’s kind of a perfect storm as far as a matchup with all of the offensive talent they have, the defensive talent we have, and I think our size and versatility bodes well for us as far as that.”

BUILT THROUGH THE NBA DRAFT

A lot of homegrown talent has helped the @warriors and @celtics reach the #NBAFinals presented by @YouTubeTV!

The Series Tips Off in The Bay @ 9 p.m. est. Follow the game live here.