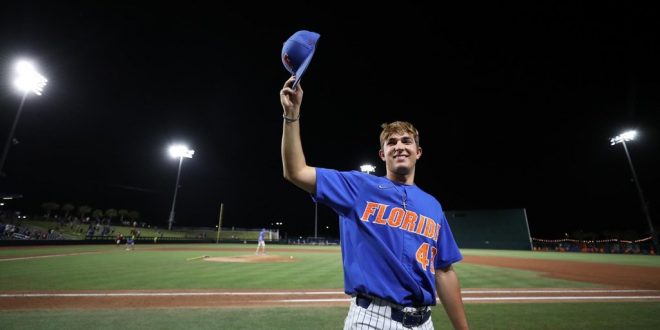 At the Condron Family Ballpark this past weekend, freshman Carsten Finnvold and the Florida Gators made history. The Gators will continue to the regional championship game and play for a spot in the Blacksburg Super Regional.

Florida will face Oklahoma for the third time in as many days today to decide who will advance. The Gators took down Central Michigan 7-3 on Friday and and 6-5 on Sunday. However, the team hasn’t found this same ease against the Sooners.

Oklahoma put up a fight, taking Florida down 9-4 on Saturday evening. In Sunday evening’s rematch, the Gators showed up with revenge on the brain and secured a 7-2 victory. Today’s match will be the third and final Gators-Sooners matchup of the tournament. The winner will head to the Blacksburg Super Regional hosted by Virginia Tech.

A Comeback for the Gators

Sunday’s match between the Gators and Sooners showcased an outstanding performance from Carsten Finnvold and his teammates. With a noteworthy performance, Finnvold entered the game in the bottom of the first inning to relieve starter Timmy Manning, coming into a bases-loaded, no-outs situation. After striking out the side, the true freshman escaped this predicament and went on to retire Oklahoma’s lineup for a complete nine innings.

Carsten Finnvold threw his way into a elite group of college pitchers, and stands as one of the only relief pitchers to throw nine innings. With a 116-pitch relief outing, the lefty shutout his opponents. He allowed only 5 hits and 2 runs throughout the entire game, without walking a single batter – an impeccable outing from an arm fans don’t see too often. Following the win, Finnvold said, “We live to fight another day.”

In addition to the performance on the mound, Florida’s bats are back. The Gators’ lineup has found their mojo once again throughout the Gainesville regional. Just last night with Jud Fabian having two solo homeruns, Wyatt Langford hitting his 25th homerun of the season, and Sterlin Thompson now hitting 8-for-14 just in the Regional, the Gators are hot. Florida hopes to carry this momentum into their third game against Oklahoma, which is set to commence today at 1:00 pm.

Each team wants to punch a ticket to super regionals. But with this level of talent on every team, it’s anyone’s ballgame.

A 2022-2023 sophomore at the University of Florida, Madison is studying Journalism, Sports and Media, with hopes to one day become a reporter and journalist. Madison graduated from IMG Academy in 2021, where she competed as a student-athlete running Track and Field. Madison loves all things sports and all things Gators!
@@madiwalkerr
Previous Former Gator Horschel Wins PGA Event
Next Pat Dooley’s Back Nine (June 6th)