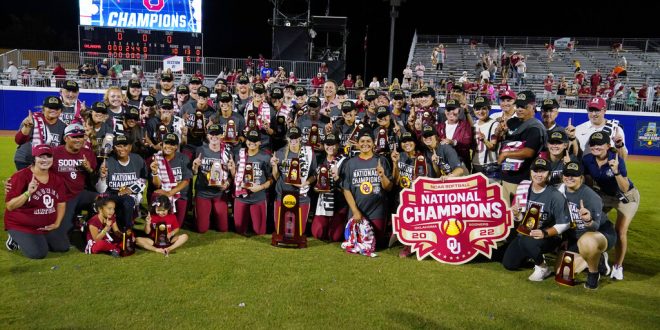 The Oklahoma Sooners became back-to-back national champions after defeating Texas 10-5 in Game two of the Women’s College World Series Championship Finals. Prior to Thursday’s game, the Sooners defeated the Longhorns 16-1 in Game 1 on Wednesday with a WCWS record six home runs. The Sooners are now six-time national champions.

Since the start of national seeding in 2005, Oklahoma softball has become the first school to gain consecutive titles as the No. 1 seed. The Sooners maintained their spot at the top as the No. 1 seed throughout the season. This is, however, the second time the Sooners have won back-to-back softball championships, also accomplishing the feat in 2016 and 2017.

While the two programs are Big 12 rivals, the Longhorns were far from providing a challenge for Oklahoma. Texas became the first ever unseeded team to advance this far. Additionally, the Longhorns reached the Women’s College World Series Championship Finals for the first time in program history.

Despite being the underdogs, Texas opened the scoring in the first inning. Janae Jefferson and Mia Scott led things off with back-to-back singles for the Longhorns. After a Bella Dayton walk and a pair of sacrifice flies from Alyssa Washington and Mary Iakopo, Texas took the lead 2-0.

Following, Oklahoma’s Jayda Coleman put an end to what could have been a three-run shot to left center field off the bat of Texas designated player Courtney Day. Day’s defensive play inspired a shift in the game’s scoring.

Texas left-handed pitcher Estelle Czech allowed a single and a walk to lead off the second, before recording three straight outs to end the inning.

Oklahoma’s defense powered to contain the Longhorns’ offense. OU right-handed pitcher Jordy Bahl managed to erase a leadoff walk in the third with a strikeout on top of an outstanding effort by shortstop Grace Lyons that forced a double play.

The Longhorns managed to hold the lead until the fourth when OU’s dominant offense kicked into gear. OU’s Left fielder Alyssa Brito reached second after doubling to right center field. Kinzie Hansen reached on a throwing error by third baseman Mia Scott, allowing Brito to score and Hansen to advance to third. On the following pitch, Taylon Snow knotted things up 2-2 on an RBI single.

Oklahoma’s offense became explosive in the fifth. Brito gave the Sooners the lead with a two-out double, allowing Lyons to advance to third. Then, Hansen smacked a dinger to left field, extending OU’s advantage to 6-2.

Sooners head coach Patty Gasso brought in Nicole May in relief of Bahl at the bottom of the fifth. After May led things off with a strikeout and fly out, Brito made an impressive diving catch in shallow left field.

Oklahoma sealed the deal in the sixth. Tiare Jennings ripped a fly ball to center field, allowing Rylie Boone to score. Lyons followed by homering to left field with a three-run shot. The Sooners now led 10-2.

Scott closed the game with a homer to left, driving in McKenzie Parker and Alyssa Popelka to score for Texas.

The Sooners gained the 2022 Women’s College World Series title with a final score of 10-5 over the Longhorns. 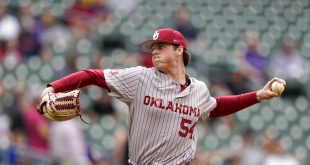