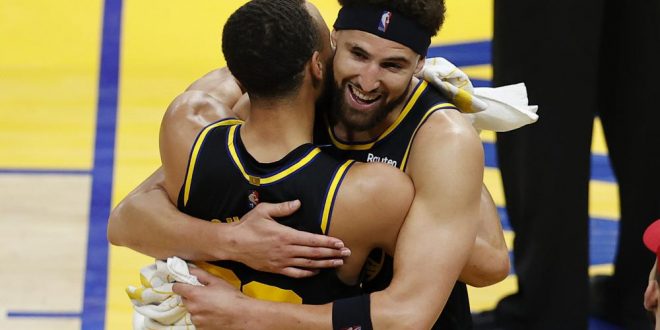 Although a three time NBA champion and two time MVP, Golden State Warriors superstar Stephen Curry has yet to win a Finals MVP. This is stunning considering Curry’s lavish success. Even more so for an individual that has transformed the sport in how teams and players operate behind the three-point line.

But with two more victories against the Boston Celtics in the 2022 NBA Finals, Curry will likely check off that last missing accolade of his illustrious career.

Getting Over the Hump

Through four games, Steph Curry is averaging 34.3 points per game, shooting 50% from the field and an exceptional 49% from three. This is following a masterful 43 point performance in Game 4 at TD Garden in Boston.

It’s safe to say Curry has been the Warriors’ most valuable player this series and will take home his first Finals MVP Award if Golden State can win two more.

With a road victory in Game 4, Golden State will be riding all the momentum into Game 5 at the Chase Center. However, both the Celtics and Warriors have proven this series that they’re unfazed by the opposing crowd with a road win a piece.

Although playing out of his mind, Curry will need his supporting cast around him to contribute more in order to have a significant chance of fighting off a resilient Boston team. This includes the likes of Klay Thompson, Jordan Poole and Draymond Green.

Draymond Green in particular has been a significant letdown these Finals. In fact, Warriors head coach Steve Kerr made the decision to bench Green late in Game 4 due to his struggling play.

Warriors coach Steve Kerr said he has no concerns about what he'll get out of Draymond Green the rest of the NBA Finals after pulling him in crunch time during Game 4.

To have a chance to steal a second victory in the Bay Area, the Celtics will need to rely on Jayson Tatum to lead the way. The 24 year old playmaker has a track record of picking up his team following losses, and will need to continue that pattern tonight.

Boston’s defense, anchored by former Florida Gator Al Horford and 2022 Defensive Player of the Year Marcus Smart, will need to adjust accordingly to keep up with the dynamic Curry. Jaylen Brown should also be expected to continue contributing points on the board.

Can the Warriors Win?

This is Golden State’s best chance to capitalize on the series and become one win away from hoisting the Larry O’Brien Trophy for the fourth time in the past eight seasons. On the other hand, if Boston can edge out a victory they’ll have a chance to win the title for the first time since 2008 in front of their home crowd Thursday night.

Game 5 of this back-and-forth NBA Finals tips off tonight at 9:00 p.m. on ABC. Coverage will be available on WRUF starting at 8:00 p.m.