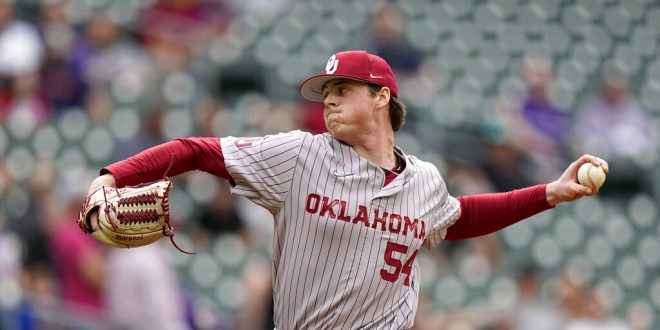 The Oklahoma Sooners have quickly become one of the most lethal teams in college baseball after eliminating #4 Virginia Tech 11-2 on Sunday to advance to the College World Series. This is the Sooners’ first appearance in Omaha since 2010.

Oklahoma’s bats got going early and often with two solo home runs in the top of the first inning by Peyton Graham and Tanner Treadway, giving the Sooners an early lead 2-0 lead. The high-powered Hokies offense responded in the bottom of the third inning with a two-run blast from Carson DeMartini.

However, the score wouldn’t stay even long after Tanner Treadway hit his second homer of the day to start the fourth, ultimately leading to a three-run inning by Oklahoma to reclaim the lead, 5-2.

The Sooners added two runs in the fifth on back-to-back doubles by Blake Robinson and Tanner Treadway and would add an insurance run in the seventh, eighth and ninth inning.

The Oklahoma offense was force throughout the game, scoring in the final six frames and hitting five home runs. That should bode well for a team looking to win a CWS.

Tanner Treadway had a monster night for the Sooners going 4 for 5 with two doubles, two homers and three RBIs.

Meanwhile, Cade Horton threw a gem for the Sooners, limiting the Hokies to one big swing. Virginia Tech hit a two-run home run in the third but couldn’t garner much after that. Horton dominated, striking out eight in six innings of work. Chazz Martinez and Trevin Michael shut the door for the Sooners without allowing a hit.

Sooners to the College World Series

Oklahoma is 24-10 since April 12 and appears to be hitting on cylinders. They’ve eliminated the #18 Florida Gators and #4 Virginia Tech Hokies en route to the College World Series, where they will face #5 Texas A&M.

Dates and times will be announced Monday evening.