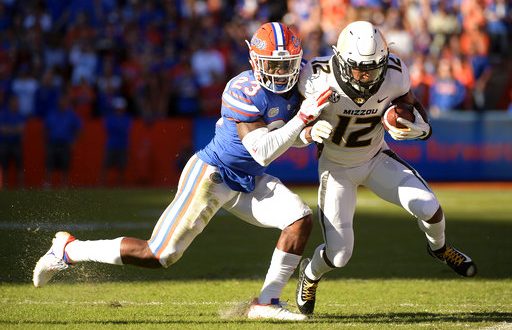 Missouri wide receiver Johnathon Johnson (12) is knocked out of bounds by Florida defensive back Chauncey Gardner-Johnson (23) after catching a pass during the first half of an NCAA college football game Saturday, Nov. 3, 2018, in Gainesville, Fla. (AP Photo/Phelan M. Ebenhack)

It was announced Thursday that the University of Florida football team will host its annual Homecoming Game against Missouri on Saturday, Oct. 8. This is the first under head coach Billy Napier. The kickoff time is TBA.

The Gators have not hosted Missouri for homecoming since 2018. The Tigers took home the win that night with a 38-17 defeat. That was former head coach Dan Mullen’s first season with the program and marked Florida’s third loss that season.

The series between the Gators and Mizzou started in 1965. Once the Tigers joined the Southeastern Conference, it became an annual event. The series is tied, 5-5.

However, Florida shut out Vanderbilt during last year’s homecoming, 42-0.

Florida’s first homecoming dates back to 1916 and has continued year after year.

The UF tradition was first celebrated in 1916 and continues to bring Gator Nation back to Gainesville every year. There will be various activities and events that will kick off during the days that lead up to the Homecoming game. Many of these events will take place all over campus.

On Tuesday, June 21, single-game tickets will be available for the general public.

Season ticket packages start at $380 per ticket. Having season tickets allows fans to experience extra benefits such as priority access to Florida-Georgia game tickets, annual gifts and away game tickets.