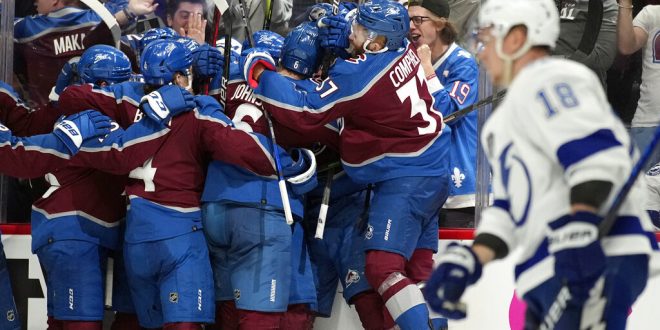 The Colorado Avalanche celebrate after an overtime goal by Andre Burakovsky in Game 1 of the NHL hockey Stanley Cup Final against the Tampa Bay Lightning on Wednesday, June 15, 2022, in Denver. (AP Photo/John Locher )

After a disappointing loss on Wednesday, game two of the Stanley Cup Finals is now a crucial win for the Lightning.

What Went Wrong for Tampa?

Defensively, the Lightning had an uncharacteristic night. The Lightning has been great on defense throughout the entire playoffs, letting up four goals just four times before game one vs. Colorado. Tampa Bay allowed four goals in game one, which is the first time since game one against the Rangers. They also got off to a slow start in the first period, scoring just one goal to Colorado’s three. Their second period consisted of two goals to tie the game at three.

How the Lightning Can Win Game Two

How the Avalanche Can Win Game Two

If the Avalanche is going to repeat their game one victory, they will need to maintain their energy in periods two and three. After a fantastic start in period one, the Avalanche didn’t get another goal until the overtime period. They will also need another strong performance from Valeri Nichushkin, who had a goal in period one, and the assist for the game-winning goal.