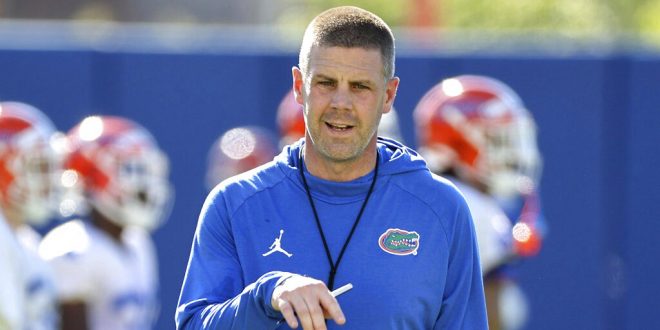 As Billy Napier assembles his second recruiting class as the head coach at Florida, the Gators’ 2023 recruiting class has seen plenty of misses, such as quarterback Jaden Rashada, and plenty of hits, such as defensive lineman TJ Searcy and corner Sharif Denson. On Thursday, Napier boosted the class by flipping quarterback Marcus Stokes from Penn State and receiving the commitment of running back Treyaun Webb.

A four-star quarterback from Ponte Vedra (Fla.) Nease High School, Stokes announced his commitment to Florida after previously committing to Penn State. Stokes had been committed to Penn State since April 8 before flipping in favor of the Gators.

Stokes follows in the footsteps of former Gator two-time national champion and Heisman Trophy winner Tim Tebow, who led Nease to a state title in 2005 before signing with Urban Meyer and Florida in the 2006 recruiting class.

Stokes and Nease recently participated in Florida’s 7-on-7 camp, where Stokes received high praise from many for his performance.

Fixed: Nease with the score as @marcusstokes06 throws for another touchdown. Complete 7v7 coverage on https://t.co/20NhoUoogb pic.twitter.com/qY82euD4O1

After Florida’s 7-on-7 camp, Stokes participated in, the Elite 11 quarterback camp, where he finished as a finalist.

In his junior season at Nease, Stokes threw for 2623 yards with 22 touchdowns while adding 496 yards and another six touchdowns on the ground. Stokes led the Panthers to a 9-4 record after only winning a total of six games the previous three seasons.

With Stokes’ commitment, Billy Napier finds the face of his 2023 class while solidifying the future of the Gators’ quarterback room.

A four-star running back from Trinity Christian Academy in Jacksonville, Florida, Webb becomes the first running back to commit to Florida in the 2023 class. Webb previously committed to Oklahoma on July 17, 2021, but decommitted on Nov. 28. Additionally, Webb had received multiple predictions from 247 Sports to commit to Penn State after a visit on June 11.

During his junior season for the Conquerors, Webb rushed for 1192 yards and 11 touchdowns in 10 games. Additionally, Webb rushed for over 800 yards with a career-high 12 touchdowns his sophomore season while winning the FHSAA Class 2A state championship in 2020.

There he goes. Treyaun Webb to a familiar place — the end zone. pic.twitter.com/mJPlPC5nBs

Similar to Stokes, Webb also has ties to Florida, but his are much stronger. Webb’s cousin, Dee Webb, played defensive back for the Gators from 2003-2006 and was drafted 236th overall by Jacksonville the following draft.

With Stokes’ flip and Webb’s commitment, the Gators’ 2023 recruiting class made a jump in the On3 Consensus, and in the 247 Sports team rankings.

Florida’s 2023 recruiting class jumped from No. 20 to No. 15 in the On3 Consensus, which also puts the Gators at No. 6 in the SEC. According to 247 Sports, the Gators have the No. 26 class in the country after previously being the No. 30 class.

Cam is a fourth-year broadcast journalism sports and media major at the University of Florida. In addition to writing and recording radio trendings for WRUF, Cam covers North Florida HS football for The Prep Zone and Mainstreet Daily News and UF football and basketball for Inside the Gators.
Previous NL Playoff Picture Through July 4th
Next U.S. Women’s Soccer Qualifies for World Cup