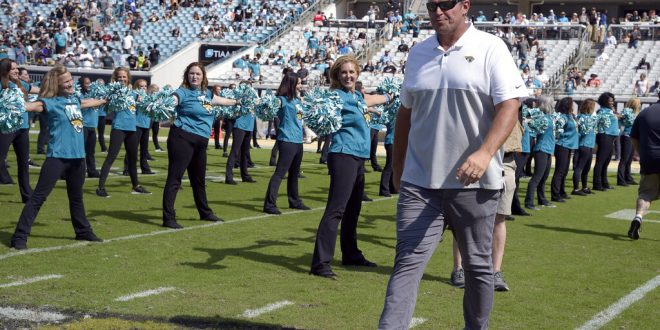 FILE - Former Jacksonville Jaguars player Tony Boselli is honored on the field during halftime of an NFL football game against the New Orleans Saints Sunday, Oct. 13, 2019, in Jacksonville, Fla. Boselli will be inducted into the Pro Football Hall of Fame on Saturday, Aug. 6, 2022. (AP Photo/Phelan M. Ebenhack)

The Pro Football Hall of Fame is set to induct eight new members, including former Jaguar Tony Boselli, on Saturday at Tom Benson Hall of Fame Stadium in Canton, Ohio.

Jacksonville’s very first pick in team history will be enshrined in his 16th year of eligibility and in his sixth year as a finalist. Additionally, he is the first Jaguar to be inducted into the Hall of Fame.

In seven seasons with Jacksonville, Boselli made the Pro Bowl five times (1997-2001) and was named First-Team All-Pro three consecutive seasons (1997-1999). Lastly, the NFL selected Boselli to the league’s All-Decade team of the 1990s.

Additionally, Boselli helped lead an offense that made it to the AFC Championship in the 1996, the team’s second season. Boselli would make another AFC Championship appearance in 1999 with the team.

In 2002, the Houston Texans selected Boselli with their first pick in the expansion draft, but retired after a serious shoulder injury.

Four years later, Jacksonville made Boselli their first inductee to the team’s Hall of Fame.

Cliff Branch is headed to the Hall of Fame. #CliffToCanton pic.twitter.com/TpIk4C1Hs5

The longtime receiver for the Oakland and Los Angeles Raiders enters the Hall of Fame after 32 years of eligibility and two years as a finalist.

At the time of his retirement in 1985, Branch held NFL career playoff records in receptions (73) and yards (1,298). Branch also holds the record for the longest touchdown reception in NFL history with 12 others – a 99-yard touchdown reception from Jim Plunkett in 1983.

On Aug. 3, 2019, Branch passed away from natural causes, two days after his 71st birthday.

From 1990-2001, Butler helped lead a prolific Packers defense that made it to two Super Bowls (XXI and XXII), winning one (XXI).

In 12 seasons, Butler led the team in interceptions in five seasons with a total of 35 for his career, good for fourth on the Packers’ all-time list.

In 1995, Mills signed with the expansion Carolina Panthers and played with the team until 1997. In 1996, the NFL named Mills First-Team All-Pro, and Mills made his fifth Pro Bowl.

After retiring in 1997, Mills became an assistant coach with the Panthers for the 1998 season and continued in that role until 2004.

In August of 2003, Mills was diagnosed with intestinal cancer, but continued to coach despite being told he only had a few months to live. During the 2003-2004 season, the Panthers made an improbable run to Super Bowl XXXVII behind Mills’ leadership.

During the season, Mills coined the phrase “keep pounding,” during a team speech. That phrase is now the Panthers’ official team slogan.

A career best capped off by a golden jacket.@BigSey93 is Canton bound. pic.twitter.com/J13Xp65UHp

In his fourth year as a finalist, former Patriots and Raiders defensive lineman Richard Seymour is heading to Canton.

Seymour’s time with the Patriots began with the team’s first run as a dynasty under the leadership of Coach Bill Belichick and quarterback Tom Brady.

During his time with the Patriots, Seymour won three Super Bowls (XXXVI, XXXVIII and XXXVIX) in four appearances. Additionally, the NFL named him to its First-Team All-Pro three times (2003-2005) and its Second-Team once (2006) during his time in New England. Seymour made the Pro Bowl every year from 2002-2006 with the Patriots.

In 2021, the Patriots inducted Seymour to its team hall of fame as a member of the 2020 class.

In his tenth year of eligibility, Young becomes the 23rd 49er to enter the Hall of Fame.

In his rookie season, he won his lone Super Bowl ring after defeating the Chargers in Super Bowl XXIX.

Hall of Fame: Coaches and Officials

After beginning his career at the high school level and working various jobs at the collegiate and professional level, Vermeil became the head coach of the Philadelphia Eagles in 1976.

In 1979, Vermeil led the Eagles to an 11-5 record and won his first AP NFL Coach of the year. The following year, Vermeil and the Eagles made a run to Super Bowl XV before losing to the then-Oakland Raiders.

After a break from coaching from 1983-1996, Vermeil returned to coach the St. Louis Rams from 1997-1999, where he won Super Bowl XXXIV and won the AP’s NFL Coach of the Year in his final season before retiring a second time.

In 2001, Vermeil returned again and coached the Kansas City Chiefs until 2005 before retiring a third and final time.

Also known as the “Father of Instant Replay,” McNally served as an NFL official from 1959-1967, where he was a referee from 1960-1967. After nine years on the field, he moved to the a leadership role as the NFL’s Supervisor of Officials, a role he held until 1991.

During his time as the supervisor, McNally introduced and developed the standards for training and hiring officials and introduced instant replay to the league.