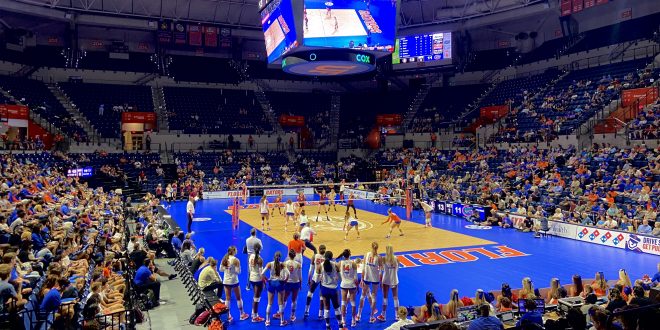 Gators volleyball hosted the Florida State Seminoles on Tuesday. The Gators came away with a three-set sweep over the Noles. (Photo by: Shailey Klein)

The Florida Gators volleyball team beat the FSU three sets to none Tuesday. The Gators were led by sophomore right side Merritt Beason with 13 kills, senior outside hitter Marina Markova with 12 kills and freshman setter Alexis Stucky with 41 assists.

Beason returned to the court after being sidelined in the Sunshine Invitational due to injury. She was cleared to play fewer than three hours before the match started. Beason shared how she approached the game on such short notice.

Florida Flies Through Set One

Florida State initially got off to a hot start taking an 8-3 lead over the Gators. A kill from Emma Clothier forced Florida head coach Mary Wise to call a timeout. Coming out of the timeout, a long rally concluded with an overpass kill from Stucky shifting the momentum to the Gators.

Bre Kelley wasted no time making her presence known at the net. Her monster block inched the Gators within two points of the Noles. The Gators rallied to tie the game at 14-all thanks to another stellar play from Kelley.

Florida began to runaway from the Noles. Markova contributed two clutch kills, while Sofia Victoria and Beason each contributed one. Trinity Adams sealed the 25-20 set one victory with an ace.

FSU Takes Set Two Down to the Wire

Once again, the Noles started strong entering the second set. After FSU took a 6-4 lead, the Gators kept the score close for the majority of set two.

The Gators went slightly downhill after going down by one point, 16-15. Florida gave up three points in a row before Gabbi Essix turned the tides with a monstrous kill. The Gators weren’t going away just yet. Victoria executed a clean kill and libero Elli McKissock delivered an ace to force an FSU timeout.

The Gators and the Noles fought for every point in the final moments of set two. Markova delivered two big kills, but it was Victoria’s kill that lifted the Florida over FSU 29-27 in set two.

Service errors and attack errors plagued the Gators at the beginning of the third set as they quickly fell behind 7-2. The Noles continued to add points to the scoreboard thanks to kills from Emily Ryan, Sydney Conley and Clothier.

The Gators trailed for much of set three, but proved they can never be counted out. Kelley pounded the ball down to bring the Gators within five points of the Noles, down 15-10. Victoria followed it up with a block.

FSU continued to capitalize on Florida’s mistakes and took a 19-14 lead. The Gators responded by inching within two points of the Noles with a score of 19-17. Beason and Essix executed a double block to make it a one point game. Emily Canaan tied it up at 20 with an ace.

The Gators took the lead for the first time in set three at 23-22. A double block by Kelley and Beason extended Florida’s lead to 24-22. Victoria put an end to the match with a strong kill.

Up Next for Florida Volleyball

The Gators have a difficult opponent looming in the No. 4 Wisconsin Badgers. The Gators travel to Madison, to take on the Badgers Sept. 16 at 8:30 p.m.