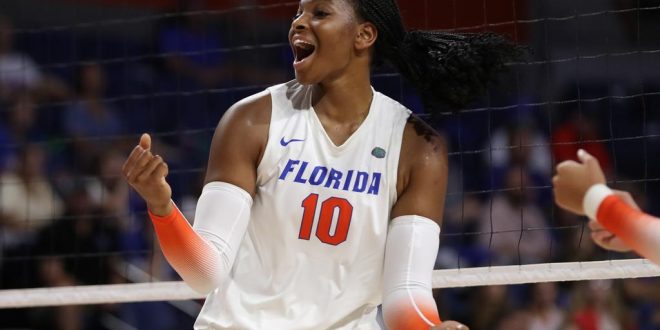 Gators Volleyball will be taking on their rival school FSU in a home game at 7:00 p.m. Tuesday, Sept. 13. Florida’s overall record is 6-2 while the Seminoles are 7-2. Last time these two teams clashed, the Seminoles took down the Gators 3-1, yet Florida currently sits at No.16 on the D1 AVCA coaches poll while FSU is unranked. Let’s take a look at which team has what it takes to bring home the victory.

First things first, the Gators started off strong this season with a three game winning streak against North Florida, East Tennessee State, and Virginia. Unfortunately they fell short the next two games and lost to No. 12 Stanford and No. 4 Minnesota. The team was able to bounce back in last weeks Sunshine Invitational Tournament and swept all three teams in two days. These teams included Georgia Southern, Florida Gulf Coast University, and VCU.

Last season, Gators Volleyball held a 22-9 record overall record and even made it their 28th Regional Semifinal in Program History. During their playtime in the NCAA Tournament,  Florida swept both Miami and Florida A & M, but lost to No. 1 Louisville 0-3 to end their season.

Their next matchup is an away game on Friday, Sept. 16 against Wisconsin at 8:30 p.m. Following that game, they kick off their first SEC competition on Sept. 21st against Alabama at home.

Will the Seminoles Be Able to Beat the Gators Once Again?

On the other hand, FSU went 20-10 last season. They also made it to the first round of the NCAA Tournament and won against Kansas State but then lost to No. 10 Nebraska in the second round. So far this season the Seminoles have lost to Cincinnati and are coming off a loss against Creighton from last Friday, Sept. 9. Notably, the Seminoles beat No. 25 Illinois in their season opener and had a five game winning streak before their loss last weekend.

Talia Baia is a sophomore at the University of Florida studying journalism with a concentration in sports and media.
@talia_baia
Previous MLB approves two rules for 2023
Next Gators Volleyball Takes Down FSU in Three-set Win

The No.16 Florida volleyball team will be back in Exactech Arena this weekend as they …