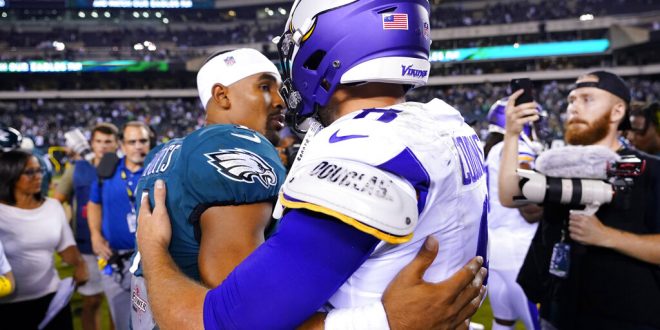 Jalen Hurts and the Philadelphia Eagles made a statement during one of the two Monday Night Football games, dominating the Minnesota Vikings 24-7. The Eagles defense made Vikings quarterback Kirk Cousins uncomfortable throughout the game, and Hurts’ 390 yards of total offense prompted Philadelphia to a 2-0 start to the season.

Eagles Successful on Both Sides

Hurts led a commanding first half, rushing for two touchdowns and passing for one. He finished the night completing 26 of 31 passes for 333 passing yards. On the ground, he rushed for 57 yards on 11 carries.

After a poor defensive performance against the Detroit Lions in week one, the Philly defense rose to the occasion. The unit forced three Kirk Cousins turnovers and allowed only seven points on the night, frustrating a Minnesota offense that looked solid against the Green Bay Packers in week one.

Vikings Get Nothing Going

Cousins struggles on MNF continued as the loss dropped his record to 2-10 in his career on Monday night. Cousins struggled to find open receivers and was forced to settle with check down’s to his running backs. Also, the Vikings receivers dropped multiple passes on the night, adding to the frustration.

Although the team did get into the endzone in the second quarter to cut their deficit to seven points, interceptions, dropped passes and the inability of stopping Jalen Hurts ruined the Vikings hopes of a comeback.

A rough night for the road team.

The Vikings now stand at 1-1 on the season and will host the Detroit Lions in week three. For the Eagles, they travel to Washington to face the Commanders in their first division matchup of the season. 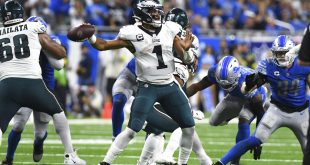 The Philadelphia Eagles take on the Minnesota Vikings Monday at 8:30 at the Lincoln Financial …