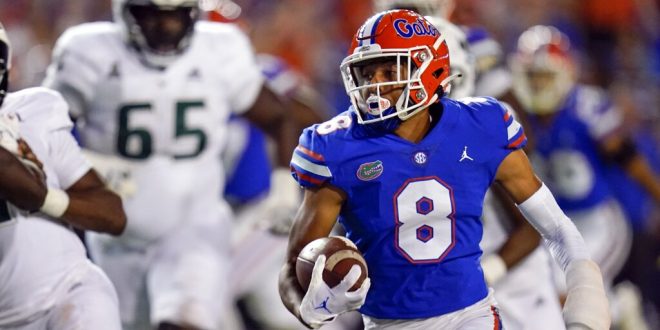 Florida linebackers Amari Burney and Brenton Cox Jr. talked about their efforts following their 31-28 win against the USF Bulls on Saturday.

Performance Against the Bulls

In a press conference on Wednesday, Burney said it was tough to watch the film against USF, but the defensive team recognized their mistakes.

Williams went on to finish with four tackles and James finished with three tackles.

This Saturday, the Gators will face the No.11 Tennessee Volunteers in a highly anticipated SEC rivalry matchup. This will be the Gators’ (2-1) first away game this season.

The Vols hold a 3-0 record and are currently favored by 10.5 points. After watching the Volunteers’ film, Burney said he recognizes their tempo is their biggest strength and the unit will need to adjust to their quick play.

Cox Jr. said he also recognizes Tennessee’s tempo and what it takes for the team to be successful on Saturday. Cox Jr. has played an instrumental role on the Gators defensive side, recording 21 tackles so far on the season.

In preparation for the Vols, the Gators defensive players said they’ve been working diligently to improve their performance. One of their key players last week was sophomore Desmond Watson, who has gradually been showing up and showing out. Watson finished with five tackles against the Bulls in week three.

In a sold out Neyland stadium, the defense will be put to the test in their first road matchup of the season. Tennessee currently average 52 points per game and has put 21 touchdowns on the scoreboard.