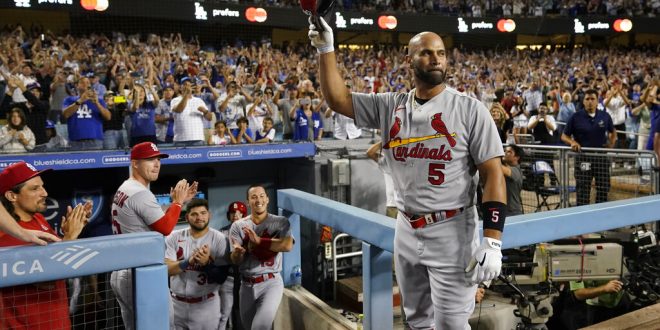 On a beautiful Los Angeles night on Friday, the Cardinals took on the Dodgers at Dodger stadium. Both teams hold comfortable division leads and are looking towards the postseason. The Cardinals took a 2-0 thanks to a Pujols home run in the third inning. This moved his career home run total to 699 and his season total to 20.

What's left to say, other than listen and take it in! pic.twitter.com/47pv6rl0tp

He stepped up to the plate again in the fourth inning. With runners on first and second and a 1-1 count, Pujols received an off-speed pitch on the inside of the plate and took it for a ride to left field. The ball landed in the first row of bleachers, sending fans into a frenzy even if they were cheering against the Cardinals. But no one was cheering against Albert. The home run cemented his spot in baseball history, as Pujols joined a list consisting of Bonds, Aaron and Ruth who changed the game of baseball.

It may sound like a story book, especially for Cardinals fans. Luckily, it was reality this past Friday night.

Pujols of course received a standing ovation as play was stopped for both teams to applaud. The first person Pujols went to celebrate with was actually in the stands. Fellow Dominican great Adrian Beltre was in attendance and the two high-fived each other after Pujols touched the plate. Many current and retired baseball stars showed their support for the Cardinal great. Alex Rodriguez made a statement on twitter to acknowledge the greatness.

Congrats to my brother @PujolsFive on joining the 700 Home Run Club! Just the fourth man ever to do it. So well deserved. #Pujols700 https://t.co/q8h3opF5h6

As St. Louis looks to head into the postseason in Pujols’ proclaimed last season, it will be interesting to see how far the Cardinals can make it. If Pujols can add another World Series to an already historic season, it would assure him a spot as a first ballot Hall of Famer.