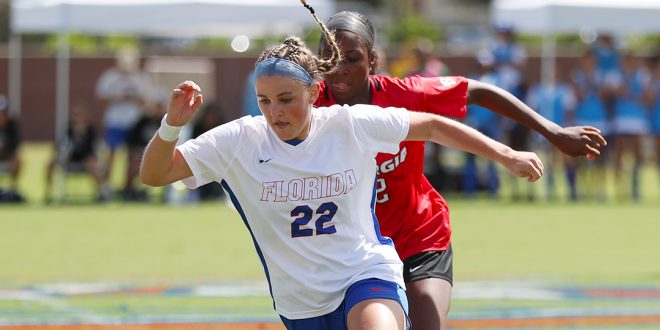 On Thursday, Florida Gators soccer (2-8) will face off against the South Carolina Gamecocks (6-2-3) in Columbia, South Carolina at 7 p.m. The Gamecocks will be the third top-25 ranked team they will take on. Initially set for Friday, the game moved up 24 hours to avoid weather expected from Hurricane Ian.

In their third SEC match against Georgia, the Gators lost 3-0 at home.

Throughout the first half, both teams gave each other a hard time executing plays that would bring out a goal. Both teams went scoreless going into halftime.

At 58 minutes, the Dawgs scored their first goal and within a 10-minute span, they scored two more goals. The Gators were unable to put up a goal on the board losing, 3-0.

Looking at the Gamecocks

To start out the season, South Carolina kept an undefeated record until SEC play started. They took on No. 11 Alabama and lost 0-2 away and No. 20 Arkansas 1-0 at home. The Gamecocks look to come out with a win to equalize their SEC record of 1-2.

Shae O’Rourke leads her team with nine points coming from three goals and three assists. Catherine Barry has 18 shots on goal out of the 43 shots she has taken in 2022.

Goalkeeper Heather Hinz saved 39 shots taken by opponents and only allowed six goals with a  save percentage of 0.867.

Since the start of the series in 1995, Florida holds the record of 22-11-2. The Gators have not beaten the Gamecocks since the 2016 SEC tournament semifinals where they won, 1-0.

The teams met on the field right before the SEC tournament in 2021 and South Carolina came out on top with a 2-1 win in Gainesville.