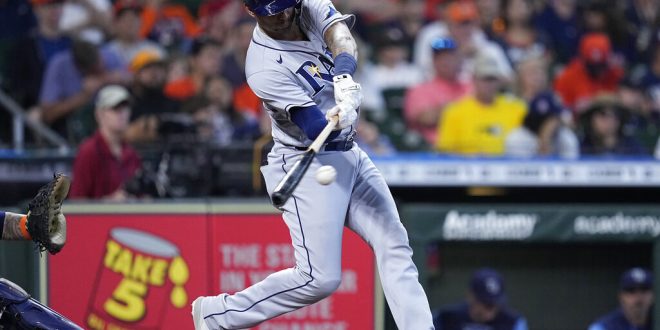 The Tampa Bay Rays travel to Boston to face the Red Sox in their final regular season series.

Tampa Bay clinched a wildcard spot on Friday for the fifth time in franchise history. They currently have a 3-0 record all-time in wildcard matchups.

Although the Rays have lost six of their last 10 games, the team holds the third wildcard spot. If the season ended today, Tampa Bay would take on the Guardians in a three-game series.

The New York Yankees and Houston Astros are locked in for a first-round-bye, so the only possible change for the Rays would be their opponent. Tampa Bay currently sits 1.5 games back of the second wild card spot, so if the they move in front of Seattle, they would face the Blue Jays in Toronto.

After losing two out of three games to the Astros over the weekend, Tampa travels north to take on the Boston Red Sox to close out their season.

Heading to Boston for the final series of the regular season pic.twitter.com/H7CmpsIBWb

The Rays have won 12 out of their last 16 matchups against Boston. The probable pitching matchup for game one of the series is Tyler Glasnow for Tampa against Rich Hill for the Red Sox.

Harold Ramirez has impressed for the Rays in the DH spot, as he leads the team in batting average (.309).

On the mound for Tampa, closer Jason Adams leads the team in earned run average posting a 1.56 ERA. Following him is starting pitcher Jeffrey Springs with a 2.45 ERA. Despite some injuries in the second half of the season, Shane McClanahan has been a leader on the rubber. He holds a 12-8 record, 2.54 ERA and has 194 strikeouts on the year.

First pitch of Monday night’s matchup between the Rays and Red Sox is set for 7:10 p.m.