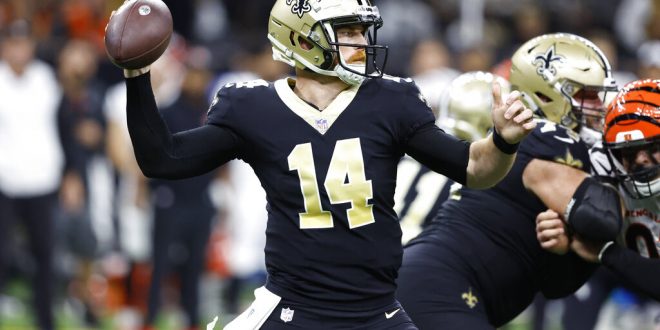 New Orleans Saints quarterback Andy Dalton (14) looks to pass against the Cincinnati Bengals during the second half of an NFL football game in New Orleans, Sunday, Oct. 16, 2022. (AP Photo/Butch Dill)

The Saints visit the Cardinals in Arizona Thursday at 8:15 p.m. in a battle of two 2-4 teams.

The Saints come into this mid week game limping a bit. They have been without quarterback Jameis Winston since Week 4. Although they have put together some valiant efforts, they are only 1-2 since turning quarterback duties over to their backups.

Andy Dalton has been the starter with a steady dose of Taysom Hill as a change up. In fact, in Week 5 the Saints won in a bit of a shoot out fashion, beating the Seahawks 39-32. The team seems to be sticking with Dalton and Hill for at least one more game according to coach Dennis Allen.

A recent problem for the Saints of late has been the secondary. The backend has let up three passing touchdowns in each of the last two games. The struggles have come as a bit of a surprise after two big offseason additions in safeties Marcus Maye and Tyrann Mathieu. The good news for the Saints, is they are just one game behind the division leading Bucs. A win Thursday could get them right back in the hunt for the NFC South.

The Cardinals come into the night looking to break an astonishing eight-game home losing streak that stretches over the past two years. After a red hot start to last season where the Cardinals eventually cooled off and lost in the wild card round, it has been tough sledding.

On Thursday, the Cardinals look for a spark from veteran wide receiver DeAndre Hopkins, who will play for the first time all year. He served a six game suspension for violating the NFL PED policy.

Despite his return, the Cardinals are still suffering big time from the injury bug, which has not helped their record on the season.

Despite being down some key players they will look for a win to jump start a good middle third of the season.