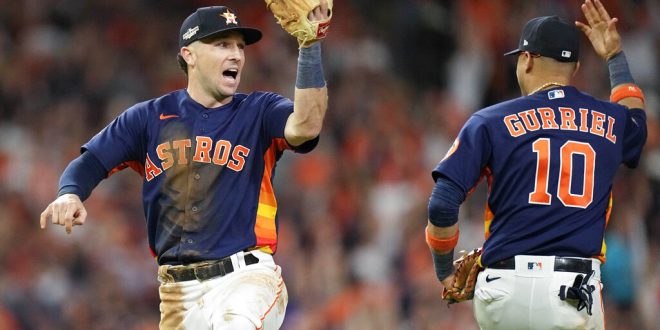 The Houston Astros defeated the New York Yankees 3-2 in game two of the ALCS last night.

Third baseman Alex Bregman led the way offensively for the Astros with a three-run home run in the third inning.

With the win, Houston takes a commanding 2-0 series lead over the New York Yankees in the ALCS. The Astros are now two wins away from their fourth world series appearance since 2017.

As the theme has been this entire postseason, the Houston Astros continued to hit well as a team.

The top-seeded team in the AL has a team batting average of .220 this postseason while averaging 8.6 hits per game.

In last night’s game, rookie shortstop Jeremy Peña accounted for three of the team’s eight hits. Centerfielder Chas McCormick added two hits of his own, while also recording a run.

While Bregman’s third-inning blast was the difference maker on the scoreboard, the Astros won because they played their style of winning baseball. Between consistently getting runners on base and stellar pitching, this team is primed to make some noise as they close in on another AL pennant.

For the second game in a row, the Yankees recorded two runs late in the game to narrow Houston’s lead. While both of these instances helped narrow the margin, the Yankees have not hit well enough at the plate to win games.

The team has struck out 30 times in games one and two combined in this series. While their main method of producing runs has come from the long ball, the Yankees have failed to do so while playing in a more difficult ballpark in terms of hitting home runs.

Last night, the Yankees were able to score off a fielder’s choice and an infield single from Gleyber Torres.

In addition to recording an RBI, Gleyber shined defensively in this game. In the seventh inning, Torres recorded back-to-back highlight reel plays to end the inning.

WHAT A SNAG by Gleyber Torres to start the double play!pic.twitter.com/PDggqGt4RF

Despite the heroics, the Yankees have failed to provide enough run support for their starters and depleted bullpen.

As the series heads back to New York, they’ll need big-time performances from All-Star pitchers Gerrit Cole and Nestor Cortes. The Yankees will also look to score via home runs, as they now will play in a much more hitter-friendly ballpark.