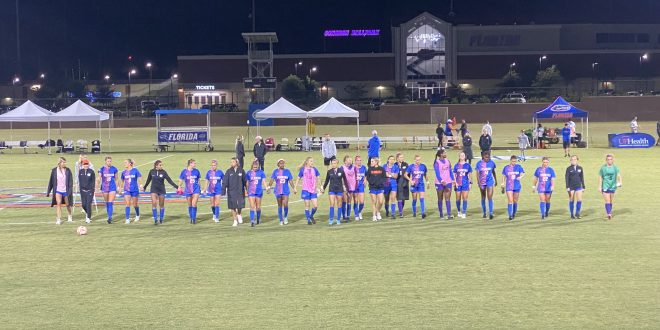 Florida Gators lost to the Commodores 5-2 on Thursday night. (Photo by Molly Cooper)

The Florida Gators (2-12-1) hosted the Vanderbilt Commodores (10-2-3) for their kicking for a cure match where they raised awareness for breast cancer. After a hard-fought match, the Commodores came out on top with a 5-2 win.

Although Vanderbilt pulled out the win, Florida hung their heads. They never let up on the pressure.

Vanderbilt came out of the huddle ready to play aggressively. Two minutes into the match they already tacked on two fouls.

Both teams struggled to break past the midfielders to where the ball moved around mainly in the middle part of the field without going toward either goal.

It was not until the 12th minute that the Commodores’ Reagan Kelley broke through the Gators’ defense and took the first shot of the game. Soon after the Commodores’ were awarded a corner kick at 19:57 that resulted in a goal scored by Peyton Cutshall, 1-0.

Florida did not take the goal lightly and started to get more aggressive. Ashley Tutas fouled a Vanderbilt player which resulted in a yellow card. Amber Nguyen took the free kick. The ball soared over the heads of Florida to knock off the crossbar into the goal, 2-0, 22:32.

Now that the Gators were down 2-0, they needed to push Vanderbilt’s defense a little more to be able to create a play to score on. At 27:12, Delaney Tauzel booted the ball from the corner to the middle of the box for Madison Young to head the ball over goalkeeper Kate Devine, 2-1.

About two minutes later, Vanderbilt’s Hannah McLaughlin lofted a cross into the box for Kelley to score off a header to put the Commodores up 3-1 just before the half.

A look back at the @raegan_kelley goal to put Vandy up 3-1. Seven goals on the season for Raegan.#AnchorDown pic.twitter.com/e8Fy7vNFKn

The half ended with Vanderbilt taking six shots and Florida at one.

Coming out of the half, the Gators were ready to score and close the gap.

Oakley Rasmussen took the first shot for the Gators and the half at 49:23. Vanderbilt responded with a shot over the crossbar at 51:48.

Florida struggled to get the ball out of their half for a significant amount of the game but kept the Commodores from scoring. A foul on Vanderbilt aided the Gators in getting the ball to the other side; however, it came right back to get slotted into the net by Kelley at 60:24, 4-1.

Ten minutes later at 70:23, Tauzel sent the ball from the corner again to Young in the middle for a goal, 4-2. Again two minutes later at 72:56, the Commodores’ Abi Brighton scored off a free kick in the top right corner to bring it back to a three-goal lead, 5-2.

Florida tried to move down the field and create plays to score off of but could not execute.

“I’m just really appreciative for this group to be down three goals and still literally fight to the very end. To me, that bodes well for the mentality of this program. One of our core fundamental values is that blue-collar fighting mentality. That was on display tonight. I’m just disappointed for them that we couldn’t keep them off the board as much” head coach Samantha Bohon said.

The Gators will play in Tuscaloosa against No. 3 Alabama on Sunday, October 23 at 7 p.m.

Molly is a fourth-year journalism major specializing in sports and media and working on a certificate in sports management at the University of Florida.
@_mollycooper
Previous Razorbacks at the Bye Week: Looking Forward
Next Astros Defeat Yankees, Take 2-0 Series Lead in ALCS