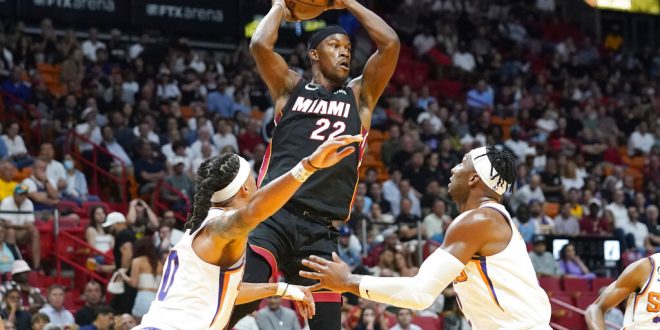 The Miami Heat earned their third straight win Monday night, coming back to defeat the Phoenix Suns 113-112. After back-to-back wins over the Charlotte Hornets on Thursday and Saturday, Heat center Bam Adebayo scored 30 points against the Suns to help Miami get the win.

In Thursday’s matchup, The 3-8 Hornets came to Miami hoping to sneak out a win. With 6:15 left in the fourth quarter, the Hornets took the lead, but that only lasted till the final minute when the Heat tied the game. The teams ended regulation knotted at 104 after a missed shot by both teams in their final possession. The game remained close into the beginning of overtime, but the Heat pulled away in the end to close the game 117-112.

In Saturday’s contest, Miami was in control for the majority of the game, out-shooting the Hornets from the three point line and ultimately winning the game 132-115.

Hot From the Free Throw Line

The Heat and the Suns went back-and-forth in Monday night’s matchup. Miami held a one point lead going into halftime, leading 58-57. Heat guard Kyle Lowry reached a career milestone, hitting his 2,000th career three pointer. He finished with 15 points and six assists. Lowry is now ranked 12th all-time in NBA history for most made three pointers made.

Additionally, Miami went 22/25 from the line which became the difference when the game came down to the wire. The Heat defended Suns shooting guard Devin Booker’s final three point shot to secure the win.

Both Adebayo and Jimmy Butler recorded double-doubles on the night. Adebayo scored 30 points and 10 rebounds while Butler had 16 points and grabbed 13 rebounds.

For the Suns, Booker finished with 25 points and Deandre Ayton recorded 16 points and 12 rebounds.

The Heat hope to extend their win streak on Wednesday when they travel to Toronto to take on the Raptors. Tip-off is set for 7:30 p.m.