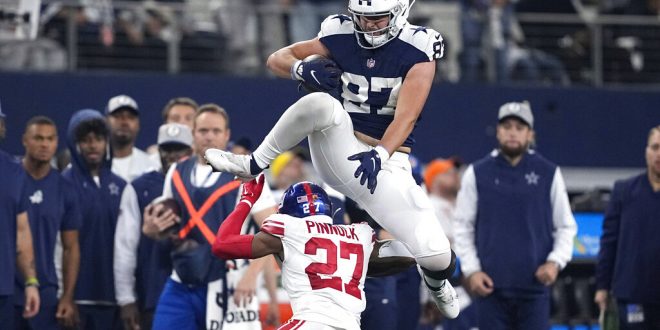 A weekend of Thanksgiving matchups saw wins from the Cowboys, Bills and Raiders.

The Cowboys’ 28-20 win over the New York Giants made headlines, becoming the most-watched regular-season game in history. The Thanksgiving matchup attracted 42 million viewers, surpassing the 1990 record of 41.474 million viewers of a Giants and 49ers game.

In addition to a new record being set, Dallas excelled at stopping the run. New York’s star running back, Saquon Barkley, was held to just 39 yards and one touchdown. Thanks to linebacker Micah Parsons and the rest of the Cowboys defense, the Giants amassed just 90 yards rushing total. Parsons also racked up two sacks and two tackles.

Another team to see a win on Thanksgiving was the Buffalo Bills. Although it might have been closer than some imagined, Buffalo was victorious over the Detroit Lions 28-25.

Allen threw one interception and was sacked three times throughout the game, twice by Lions rookie James Houston. Houston became the first player in franchise history to have a multi-sack game in their first career NFL game.

The Buffalo defense, on the other hand, seemed to have a difficult time stopping Detroit wide receiver Amon-Ra St. Brown. St. Brown racked up 122 receiving yards and a fourth down touchdown.

In a 40-34 overtime win, Derek Carr and the Las Vegas Raiders took down Geno Smith and the Seattle Seahawks. Seattle was unable to contain the run, but one Raider in particular had a breakout game.

Running back Josh Jacobs put up 229 yards rushing and 74 yards receiving, leading his team in both. Jacobs also added two touchdowns to his stellar performance, including the game-winning, 86-yard rushing touchdown.

The Las Vegas defense was better at stopping the run, holding the Seahawks to 65 yards rushing but allowed 328 passing yards from quarterback Geno Smith.

Week 12 in the NFL comes to a close Monday in an AFC MNF matchup between the Steelers and the Colts. Kickoff is set for 8:15 and coverage will begin on WRUF at 7:30.

Scarlett Cooney is a second-year journalism student specializing in sports and media.
Previous USMNT Vs. Iran Preview
Next SEC Regular Season Comes to an End with Georgia on Top