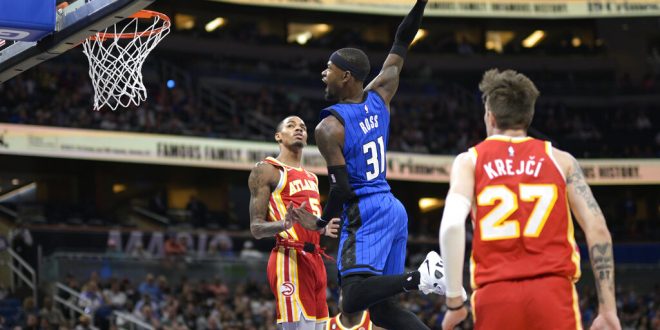 Orlando Magic guard Terrence Ross (31) goes up for a dunk next to Atlanta Hawks guard Dejounte Murray (5) during the second half of an NBA basketball game Wednesday, Nov. 30, 2022, in Orlando, Fla. (AP Photo/Phelan M. Ebenhack)

Winning in the NBA is challenging to do for any team with the amount of talent each team has. As for the Orlando Magic (5-17) this season, they look like they need magic to scrape out any positives on this team.

The Magic are a young team that still is some time away from being competitive but may have a little more hope then you would expect. They have a 2-8 record in their last 10 games with one of their wins being by one point. It is hard to have much confidence at all in this team going forward with how the team has played. Orlando has had good performances from their young players but not enough to carry the team to many wins.

Orlando is fresh off of a 125-108 loss to the Atlanta Hawks (12-10) on Wednesday. The Hawks got started early with a 38-27 point lead after the first quarter and did not look back. The Hawks were led by young phenom Trae Young who scored 30 points with 14 assists.

The Magic have had their young talent step up for them this game. power forward Franz Wagner recorded 22 points and six rebounds. Additionally, small forward Paolo Banchero dropped 20 points along with his five assists.

Banchero was the number one overall pick in 2022 draft and has started his first season strong. He has been the bright spot for this team and should give Magic fans hope for the future. At 6’10”, 250 pounds, he has been able to use his size to assist his game in the paint. He scored 17 of his 20 points against the Hawks in the paint.

Ultimately, The star power of the Hawks were to much for the Magic to overcome. The early lead was crucial and Orlando could not claw their way back in the game.

Things have been bleak for the Magic as they will have another test on Friday, The Cleveland Cavaliers (14-8). This game could pose a lot of trouble for the Magic with the Cavs having a 9-1 record at home this season.

Star shooting guard Donovan Mitchell is averaging 28 points and five assists for the Cavaliers. As well as point guard Darius Garland having averaged 2.3 made 3-pointers over the last 10 games for Cleveland.

The Magic do have size on their side in this matchup but may struggle guarding the perimeter against this Cavs team that can shoot. The Magic will hope to end their six game losing streak Friday night and get some momentum going forward.