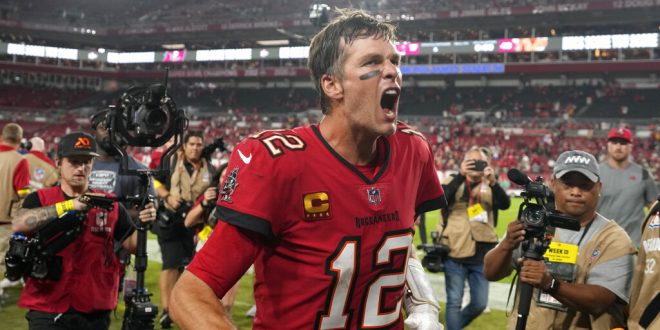 Tampa Bay Buccaneers quarterback Tom Brady (12) reacts to the fans as he runs off the field after an NFL football game against the New Orleans Saints in Tampa, Fla., Monday, Dec. 5, 2022. The Buccaneers won 17-16. (AP Photo/Chris O'Meara)

The Tampa Bay Buccaneers pulled out a fourth quarter win over the Saints Monday night, after an unpromising start to the game.

The Bucs started out the game by being the first on the board scoring a field goal on the first drive. It was not until seven minutes left in the second quarter that there was another point on the board in the form of a Saints touchdown. Tom Brady threw an interception with just under two minutes left in the half that resulted in a New Orleans field goal. The score was a low 10-3 at halftime.

The Saints were unable to score on the first drive of the game, but their defense made up for it by forcing a fumble at their own 43 yard line. This turnover also resulted in a field goal for the Saints making the score 13-3 at the end of the third. On their next possession, the Saints extended their lead to 13 with eight minutes left in the game, but it was not enough.

Brady and the Bucs responded with a 13-play, two minute long drive that resulted in the first touchdown of the second half. The Saints went three and out on their next drive giving Brady the ball back with 2:40 left in the game and only being down by six points. The drive resulted in a Bucs touchdown making the ending score 17-16.

Though their offense did not get the ball rolling until the last five minutes of the game, the Bucs dominated the night statistically. Having 350 total yards and 25 first downs, Tampa Bay was 8/15 on third downs.

The Saints also had double the amount of penalty yards, the Bucs had only 39 and the Saints had 84. The Saints also forced two turnovers that they turned into six points. Chris Godwin was the top receiver for the Bucs Monday night having eight receptions for 63 yards, and Rashid Shaheed was the stand-out receiver for the Saints having 75 yards after a total of just four receptions. Brady threw for a total of 281 yards.