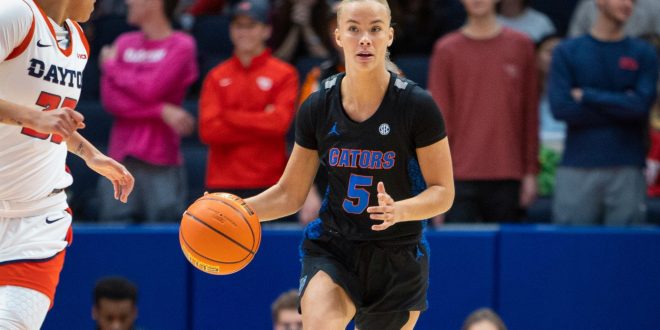 Alberte Rimdal dribbles up the court in the Gators women's basketball team's victory over the Dayton Flyers on Sunday. Photo courtesy of @GatorsWBK on Twitter.

After an exciting 69-65 victory over Dayton on Sunday, the Gators women’s basketball team will host Presbyterian Tuesday at 6 p.m. This is the second time in program history the Gators will take on the Blue Hose. The last time this matchup occurred was in Nov. 2019, with Florida coming out on top 60-46.

The Gators hold an 8-1 record through nine games to start the season. If the team stays on this track, they could potentially have their best start to the season in program history. Back in 2015, they opened with a 12-1 record. Florida’s most impressive start was in 2008-09, when they began the season winning 15 of their first 16 games. Most notably, the team is nearing it’s 800th win overall during 49 years of program existence. If the Gators come out with a win tonight, they will stand at 797 wins. There are 12 other SEC women’s basketball programs who have reached this goal. Tennessee and Georgia are leading the pack with 1,401 and 1,018 wins, respectively.

It’s obvious that the Gators have sharpened their defense this season. Nine games in, the team averages 21.33 forced turnovers per game, which is second in the SEC and 35th nationally. Contributing to this is the five games in which the team forced over 20 turnovers. This was most noticeable in their first game of the season against Florida A&M. The team forced the Rattlers to rurn the ball over 28 times back on Nov. 7. With an average of 10.4 steals per game, Florida ranks fifth in the SEC and 58th in the nation.

The Blue Hose will have to contain senior guard Nina Rickards, who posted her career best in points and rebounds on Sunday against the Flyers. She put up 24 points for the Gators adding 11 rebounds. Sophomore guard Alberte Rimdal looks to top her record of 19 points, which added to the Gators win against Furman this season. 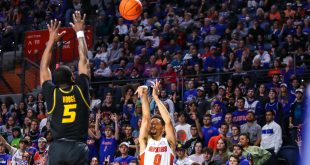