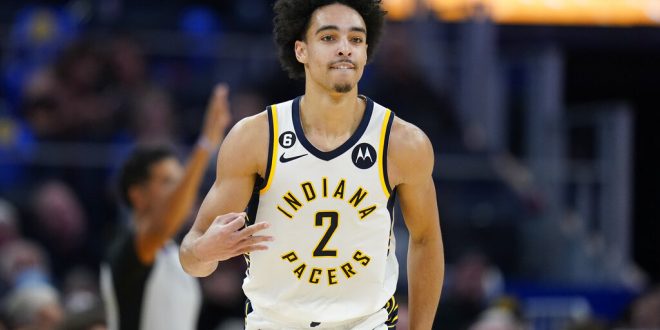 Indiana Pacers guard Andrew Nembhard reacts after scoring a 3-point basket against the Golden State Warriors during the second half of an NBA basketball game in San Francisco, Monday, Dec. 5, 2022. (AP Photo/Godofredo A. Vásquez)

Former Gator point guard Andrew Nembhard, who also spent time at Gonzaga, is creating himself a role for the Indiana Pacers.

Nembhard: Path to the League

Nembhard came to Florida in 2018 and was a day-one starter for the Gators at point guard. He led the Gators in assists and to the NCAA tournament where they won their first game before being bounced by Michigan. The following year Nembhard had a break-out year, averaging 11.2 points and 5.6 assists before the season was cut short due to the COVID-19 pandemic. Following that season, Nembhard transferred out to Gonzaga playing alongside Jalen Suggs in the backcourt.

He played two years at Gonzaga making the Final Four once and Sweet Sixteen twice. After his senior season of averaging a career high 11.8 points per game, he entered the NBA draft. He was selected by the Pacers in the second round with the 31st overall pick.

Since joining the Pacers, Nembhard has found a real role. Perhaps his greatest asset has been his passing. Nembhard boasts nearly a four to one assist to turnover ratio, leading the league for rookies. He is also nearly on pace for a 50% field goal percentage, 40% three-point percentage and 90% free throw percentage, this season. The only place he barely misses the mark is field goal percentage coming in at 48%.  These elite shooting numbers have resulted in the rookie seeing 23.8minutes per game so far this season.

He also has been clutch. On Nov. 29 in LA against the Lakers, his team needed a bucket for the win  down the stretch. A teammate swung it to Nembhard and he knocked down a three as time expired for a massive win for the Pacers.

The Pacers currently hold the fifth spot in the Eastern Conference. Nembhard will have to continue to play well in the long NBA season for them to make a playoff push.

Previous Heat Fall to Pistons 116-96
Next P.K. Yonge Blows Past Eastside on the Road