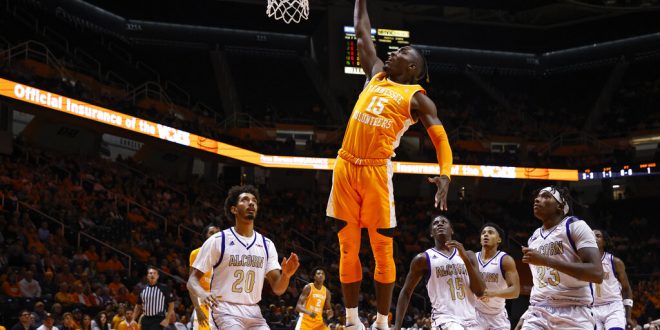 Tennessee guard Jahmai Mashack (15) goes for a dunk past the Alcorn State defense during the first half of an NCAA college basketball game, Sunday, Dec. 4, 2022, in Knoxville, Tenn. (AP Photo/Wade Payne)

The latest AP Top 25 College Basketball Poll was released Monday, with Houston, Texas and Virginia holding the top three spots. Preseason No. 1 North Carolina dropped out of the rankings after losing four straight games, and No. 20 Michigan State also fell out after dropping two in a row against Notre Dame and Northwestern. Three Southeastern Conference teams reached the top 10: No. 7 Tennessee, No. 8 Alabama and No. 9 Arkansas.

The SEC leads all conferences with six teams in the poll. The B1G and Big 12 are next with five, while the Atlantic Coast, Pac-12 and Big East registered two each. The remaining spots are held by the American Athletic, West Coast and Mountain West conferences.

Tennessee sent a message in the preseason by defeating then-No. 2 Gonzaga 99-80 on Oct. 28 during an exhibition game. However, the Vols had a shaky start after losing their second game of the season to Colorado, 78-66, on Nov. 13.

Since the loss, Tennessee has gone 6-0, including a 64-50 win over then-No. 3 Kansas in the Battle 4 Atlantis Championship game. Part of the Vols’ success this season has been their explosive scoring production and the third-best defense in the league (51.5 points allowed per game.)

Offensively, Tennessee averages 75 points per game, with five players averaging double digits in scoring. Those include guard Santiago Vescovi leading the charge with 12 PPG, followed by forwards Julian Phillips (11.8), Olivier Nkamhoua (10.9) and guards Tyreke Key and Josiah-Jordan James with 10.8 each.

Alabama entered the season at No. 20 after securing a top-three recruiting class for 2022. So far, the Crimson Tide has lived up to the expectations after starting the campaign with six straight wins.

The team’s lone loss of the season came at the hands of then-No. 20 UConn on Nov. 25 during the Phil Knight Invitational. Alabama, however, bounced back dramatically after beating UNC 103-101 in 4OT two days later.

Collectively, the Crimson Tide leads the nation in rebounds per game with 50.3 and is 19th in PPG with 83.5. Forward Brandon Miller has been a major contributor with 19.1 points and 8.9 rebounds per game. Guard Mark Sears has also averaged 14.9 points and 3.5 assists this season.

The Arkansas Razorbacks started the year with high expectations after reaching the Elite 8 in last season’s NCAA Tournament and securing the second-best recruiting class this season, only behind Duke.

This year, Arkansas has rolled past opponents by averaging 78.2 PPG and holding them to 61.9 points. The team’s lone blip of the season was an 90-87 loss against ranked Creighton on Nov. 22 at the Maui Jim Maui Invitational.

Auburn is off to an undefeated start this season after averaging 73 points and 42 rebounds per game. Outside the top five, the Tigers are one of only three other undefeated teams in the rankings.

Despite the impressive start, only one of those wins has been against a power-five opponent. Auburn beat Northwestern 43-42 on Nov. 23 after the Wildcats missed a shot with two seconds left on the clock.

The Wildcats dropped their third match of the season in a 2OT game against Michigan State on Nov. 15. Five days later, Kentucky fell short against Gonzaga, 88-72. One highlight of the Wildcats’ season is Oscar Tshiebwe’s presence.

The 2022 Naismith College Player of the Year leads the nation with 13.5 RPG while scoring 14.2 PPG. Tshiebwe has also posted four double-doubles in his last seven games.

The Bulldogs are in the Top 25 for the first time since January 2019 under first-year head coach Chris Jans. In less than half a season, Jans had led the team to a complete turnaround from last year’s 18-16 record.

Defensively, Mississippi State has the second-best defense with 49.6 points allowed per game, only behind top-ranked Houston. In eight games, forward Tolu Smith is averaging a double-double with 16.3 points and 10 rebounds.