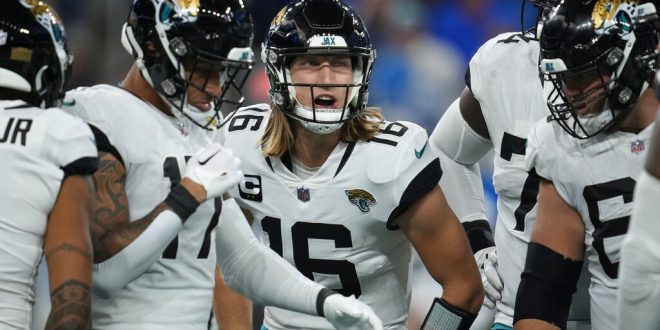 Jacksonville Jaguars quarterback Trevor Lawrence (16) talks to his team during the second half of an NFL football game against the Detroit Lions, Sunday, Dec. 4, 2022, in Detroit. (AP Photo/Paul Sancya)

This Sunday, the Jaguars will be heading over to Nashville to take on the Tennessee Titans. At the moment the Jaguars have three injuries on the team, one of them being quarterback Trevor Lawrence. The Titans have more injuries on the report, they have five injuries with one of them being wide receiver Treylon Burks. Last year they played against each other and the Jags lost 20-0. In the first and third quarters, the Titans scored seven points. In the second and fourth quarters, the Titans scored three points.

The last game for the Jaguars was against the Detroit Lions. The game was held in Michigan. The Lions won 40-14. The game leaders were Lawrence with 179 yards and a touchdown, Etienne with 54 rushing yards and Kirk with 104 receiving yards.