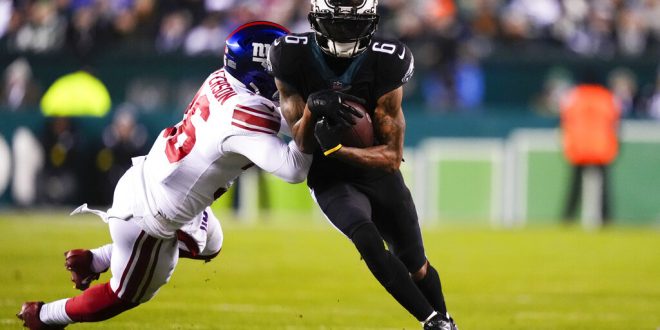 The New York Giants and the Philadelphia Eagles will face off in the NFC divisional round on Saturday. Kickoff is scheduled for 8:15 p.m. in Philadelphia.

The Giants are coming off an impressive wild card win against the Minnesota Vikings on the road Sunday. After five consecutive losing seasons, first-year head coach Brian Daboll, Daniel Jones and Saquon Barkley led the Giants to their first playoff win since 2011.

They look to knock out the one-seed in the NFC when they travel to Philadelphia. New York hasn’t beaten the Eagles in Philly since 2013.

The Giants’ main focus on Saturday should be avoiding mistakes. On Sunday, the team nearly lost to the Vikings due to Darius Slayton committing a fourth-quarter drop. Luckily, the New York defense stepped up and halted Minnesota’s final drive with a fourth down stop.

Additionally, the Giants have to take notice of a couple holes in their defense. Offensive tackle Evan Neal, a rookie, and left guard Nick Gates have a major challenge ahead. The Eagles had an impressive 70 sacks, this season. Andrew Thomas, one of the best left tackles in the league, Neal and Gates will have to bear the Eagles’ lasting pressure.

As the No. 1 seed in the NFC, the Eagles have high hopes for a Super Bowl appearance. Quarterback Jalen Hurts is back to full health after being out for the Eagles’ Week 16 and 17 matchups with a sprained shoulder. Hurts will be key in gaining rushing yards for the Eagles and he said he’s expecting pressure from the Giants defensive line.

The curiosity stands on whether the Giants can continue to shock NFL fans around the country, or if Hurts can pull through for another Eagle win.