Finally a win for Tiger Woods in a PGA golf tournament; Tony Stewart wins again in our Monday Sports News And Notes…

** Tiger Woods is a winner on the PGA Tour for the first time in 30 months as he wins the Bay Hill Classic in Orlando.   He shoots a final round 70 to beat Graeme McDowell by five shots.

** Tony Stewart wins the NASCAR race in California on Sunday with the help of a little rain.   Stewart was declared the winner of the race after rain postponed the event with 71 laps to go and Stewart leading the race.   It was his second NASCAR win of the year.

** The NCAA women’s basketball tournament is still in action and SEC member Kentucky has moved to the Elite Eight.   Coached by former Gators assistant Matthew Mitchell, the Wildcats beat Gonzaga 79-62 to move to the Kingston Regional Finals Tuesday against Connecticut, a 77-59 winner over Penn State.   Tennessee plays overall number one seed Baylor today in the Des Moines Regional Finals and Duke plays Stanford today in the Fresno Regional Final.   On Tuesday, Maryland plays Notre Dame in the Raleigh Regional Final. 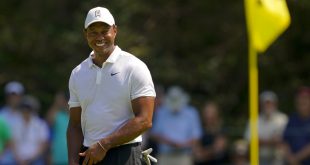