With 12 NCAA Tournament appearances and two appearances in the Women’s College World Series Final, the top ranked University of Florida softball program has seen a great deal of success since its inaugural season. However, the players and coaches who make up the program insist the team is more than just their achievements on the field. Head Coach Tim Walton says although he loves the competitive nature of the sport, his joy is in building better players – and better people.

Michelle Moultrie, the only senior on the 2012 squad, says she has taken away this and much more in her four years as a Florida student athlete. According to Moultrie, Coach Walton and the trainers have taught her better footwork in her position as a center fielder, and improved her batting techniques by teaching her how to bunt and adjust her swing. In the classroom, she says the advising and tutors provided by the University Athletic Association have given her the help and resources she needs to make the grades. But, Moutlrie says the bigger lessons she has learned as a student athlete have been ones she can take with her for the rest of her life.

Walton says this attitude is what has brought Moutlrie success in the sport and off the field as well. He says her drive and dedication sets a perfect example of what he looks for in potential players. When he recruits, he says he looks for athletes like Moultrie who are well-rounded and have their priorities in line.

It’s clear Moultrie was able to handle the heat. In her time at Florida, she played on the US Softball Women’s National Team in 2011 and 2012 and helped lead the USA to gold medals in the Softball World Cup and the Pan-American games. Last year when her team played in the Women’s College World Series Final, she was selected as the WCWS Co-Most Outstanding Player. While the awards and success have been great, the senior says it was only possible through four years of hard work.

This season, the team hopes to follows Walton’s “Outscore Every Opponent” motto and advance to play in the College World Series game for a second year in a row.

For Moultrie, regardless of how the season ends, her softball career is far from over. She was the 12th overall National Pro Fastpitch draft pick, selected by the USSSA Florida Pride in Orlando. She isn’t sure what her future holds when she leaves Florida, but she knows she’s going to take softball – and the lessons it has taught her – with her.

Until then, Moultrie and the Gators will take it one game at a time, looking to outscore Auburn in the first of a three game home series on Friday, April 13th. 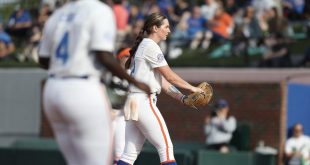