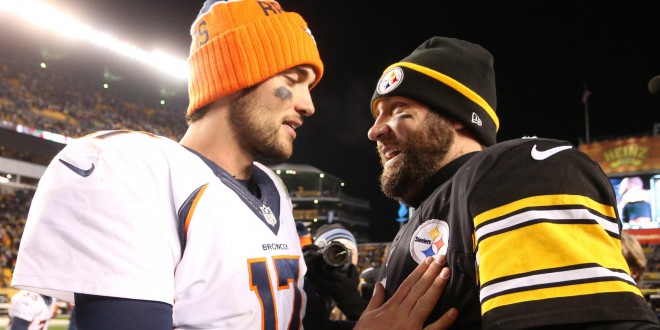 NFL Preview: Steelers-Broncos Battle of the Beat Up

The first time the Denver Broncos (12-4) and Pittsburgh Steelers (10-6) met this season on December 20, Ben Roethlisberger looked sharp, completing 40 of his 55 passes for 380 yards and three touchdowns. Antonio Brown showed off his unbelievable talent catching 16 passes for 189 yards and two touchdowns, while DeAngelo Williams led the rushing attack and found the end zone once. For the other squad, Brock Osweiler, filling in for the injured Peyton Manning, posted 296 yards, completing 21 of his 44 passes, finishing with three touchdowns.

This time, the story is completely different. Antonio Brown and DeAngelo Williams are officially out for this Sunday’s contest while Ben Roethlisberger is questionable with several torn ligaments in his throwing shoulder. For the Broncos, Brock Osweiler is questionable with a knee injury and did not practice this past Wednesday. Current backup, and former starter Peyton Manning may be the lead signal caller for Denver in this one, with his last start coming on November 15 in a 29-13 loss to the Kansas City Chiefs. Peyton Manning is no stranger to the NFL playoffs, but in his career with the Colts and Broncos, is only 11-13 in the postseason. The Steeler’s Ben Roethlisberger has had a bit more success in the playoffs, posting an 11-5 record in his 12 seasons with Pittsburgh.

The Broncos come into the game as a seven point favorite with the game being played at Mile High Field. Denver has won their last eight of 11 meetings against Pittsburgh, including a recent postseason matchup featuring former Gator great Tim Tebow, in which Tebow led the Broncos to a 29-23 victory over the Steelers. In that game, Tebow threw for a career high 316 yards, completing 10 of 21 passes, and two touchdowns, while also rushing for 50 yards and a touchdown.

Pittsburgh-Denver can be seen on CBS, with kickoff projected for 4:40 p.m. this Sunday.