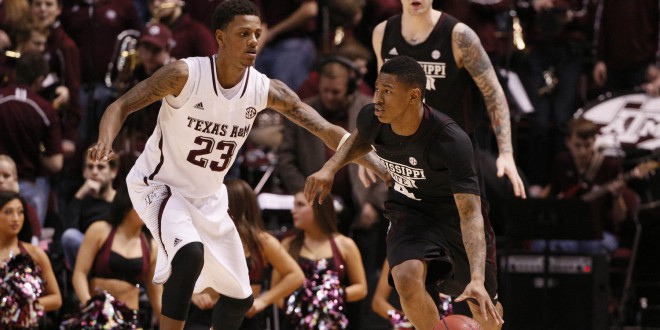 Wednesday the Mississippi State Bulldogs travel to College Station to take on Texas A&M. The Aggies are currently 20-7 overall and 9-5 in the SEC. They’re 15-1 on their home court this season after earning their last two wins over Ole Miss and Kentucky. The Aggies are looking to keep pace for first place in the SEC, right behind No. 14 Kentucky at 10-5. Mississippi State is also coming off back to back wins over Vanderbilt and Alabama. They are 12-14 on the year, 5-9 in the SEC. Hanging on to their momentum, they will look to pick up their first win against the Aggies this season.

The Aggies have three players who average double digits including senior Jalen Jones who leads his team with 16.0 points per game. Behind Jones is Danuel House (15.4), and Tyler Davis (10.9). In order for the Bulldogs to pull off a win they will have to step up their defense. Texas A&M is not going to make it easy for them with 20 plus offensive rebounds in each of their last two games. However, the Bulldogs have four players who average double digit points this season, under first year head coach Ben Howland. Big man Gavin Ware leads the team with an average 15.9 points per game, followed by Craig Sword (12.5), Malik Newman (12.3), and Quinndary Weatherspoon (11.8).

Tyler Davis (Co-SEC player of the week) was clutch for the Aggies in last Saturday’s win over Kentucky. He pulled off a last second basket to give them the 79-77 victory. Jones also played a prominent part in the win, adding 24 points, his 10th time this season pulling off 20 or more points in a game.  Meanwhile, the Bulldogs defeated Alabama on the road Saturday in a 67-61 win. Quinndary Weatherspoon who was also named (Co-SEC player of the week) was the star for the Bulldogs in Saturday’s win. He scored a career-high 24 points and knocked in a three pointer in the last seconds of the game.

The Aggies own the all-time series 5-3.

Mississippi State and the University of Memphis look to extend their records to 3-0 Saturday. …