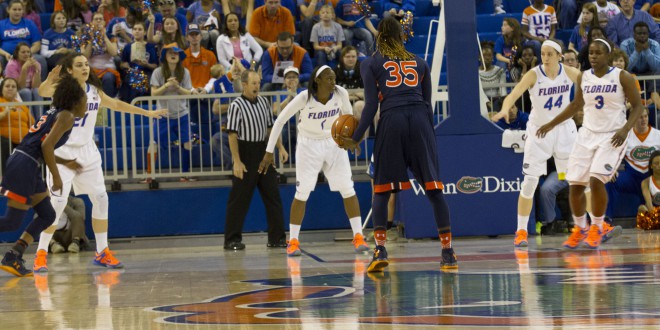 The Tigers did their best to spoil Senior Day for the UF veterans after they rebounded from a poor first quarter performance by shooting 53 percent from the field to take a two point lead heading into halftime.

The Gators suffered a slight scare before the break when freshman sensation Eleanna Christinaki fell to the ground hard and hit her head as she wrestled for an offensive rebound. She would later return to game after sitting out the first few minutes of the third period.

Auburn led for a total of 20 minutes despite the resilience the Gators showed in continuing to battle back to stay within striking distance for most of the second half. Though Florida shot a dismal 25 percent from field for the game, the Gators managed to regain the lead in the last two minutes of the final period with their stifling defense.

Head coach Amanda Butler says Florida’s ability to persevere put them in a position to win the game.

Florida held the Tigers to just 11 points in the fourth quarter on 36 percent shooting, and forced Auburn into 26 turnovers for the game en route to the victory. Forward Haley Lorenzen, guard January Miller, and guard Cassie Peoples kept the Gators afloat on the offensive end by reaching double figures scoring (10, 11, and 11, respectively).

After having lost to the Tigers when they met a couple of weeks earlier in Alabama, this win proved to be a welcome sight for the Gators as they looked to establish some momentum heading into the SEC Tournament this week.

Butler says she’s proud of the way they played against Auburn this time around.

With this win, the Gators will finish fourth in the SEC after initially being projected to finish 12th in preseason rankings.

Senior guard Carlie Needles says they’re not surprised to have finished higher than everyone else originally projected.

The Gators will have a two day bye before starting play in the SEC Tournament this week this Friday when they face-off against either the winner of Game One in round one or the fifth seed in the conference.

Tip-off for that game is set for noon.