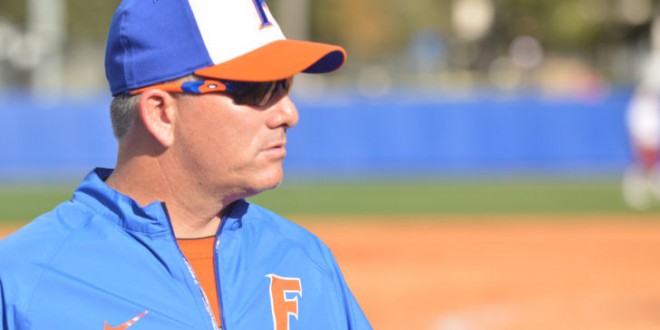 The Gator softball team took the field on Wednesday for the first time since losing their first game of the season on Monday against Auburn. Luckily for the Gators, Wednesday’s result was much better as they defeated Winthrop 7-0  in Gainesville.

The Gators got off to a fast start in the first inning. Freshman pitcher Kelly Barnhill quickly struck out the first three batters from Winthrop. Kelsey Stewart and Amanda Lorenz then scored two quick runs in the bottom of the first and UF took a 2-0 lead.

Florida was held scoreless in the second and third innings before coming alive again in the fourth. In the bottom of the fourth,  Stewart recorded an RBI to score Justine McLean. Stewart then scored her second run of the game off a Winthrop error, and the Gators extended their lead to 4-0.

The fifth inning was even better, with the Gators scoring three runs on five hits. Nicole DeWitt recorded two RBI to score both Taylore Fuller and Alex Voss and DeWitt would then score her own run off a RBI from Aubree Munro, and the Gators cruised from there.

A bright spot for the team was pitcher Kelly Barnhill, who had her best day as a Gator. Barnhill struck out 18 batters, which is a single game record for strikeouts by a pitcher for the Gators. Following the game, Barnhill said it felt great to have 18 strikeouts.

Florida now holds a 27-1 record. The team will face Tennessee this weekend at home.