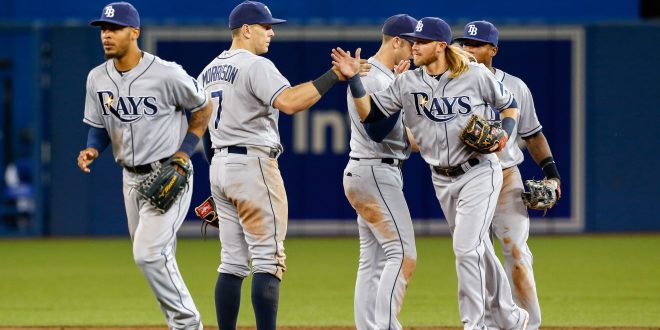 The Tampa Bay Rays finished their three game sweep of the Toronto Blue Jays last night with a score of 6-3. The victory puts the Rays record back at .500 on the season.

The Rays pitching staff has always been the strong suit for the team, but the offense came alive against the Blue Jays. With a combined 31 runs during the three game series, the offense is starting to click.

In fact, the Tampa Bay Rays are leading the major leagues in home runs. No, really, their 58 home runs is one more than the Orioles and two more than the Mets.

First baseman Logan Morrison says that the team is building confidence off the their recent success. The key, according to Morrison, is the team has been successful getting hits in key situations with runners in scoring position. The numbers back up Morrison’s claim. The Rays were batting .387 with RISP during their series against the Blue Jays.

The next series for the Rays will start Friday night against the Detroit Tigers. Tampa Bay will hope to keep the momentum on the road versus a sub .500 Tigers team. Even though Detroit’s overall record has been a disappointment thus far, they still statistically have one of the better offenses in baseball.

Matt Andriese will get the start for the Rays while the Tigers hope Anibal Sanchez can slow down a hot Tamp Bay lineup.