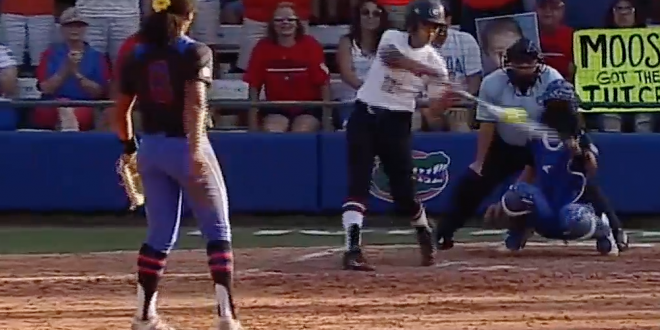 Down 1-0 in a best-of-three Super Regional match up at home, the top-seeded Florida softball team (56-7) dropped a consecutive game against the 16th seeded Georgia Bulldogs (45-18) in a 3-2 elimination loss on Friday to end Florida’s season.

Florida pitcher Aleshia Ocasio ended her season 22-2 after the loss while UGA ace Chelsea Wilkinson improved to 26-7 on the season. Both pitchers ended the game with five hits allowed and zero walks.

A change in the usual lineup, Florida head coach Tim Walton decided to lead off with Amanda Lorenz to hopefully provide the Gators with more offense.  Walton says he was confident in his game plan going into this match up, but it wasn’t enough to beat Georgia.

Florida started the game very shaky on defense.   UGA got a hit early and after a UF error, a pop up in the infield was missed by the Gators and the ball was called foul.  Georgia assistant coach Tony Baldwin was ejected from the game after arguing the call.  Alex Hugo singled to load the bases but a force out prevented any run damage by Georgia.

In the second inning, a pop up that should have been caught by Florida for an out was not and it fell foul.  On the next pitch, Georgia hit a solo homer to give them a 1-0 lead.  After that, Florida starting pitcher Aleshia Ocasio settled down and held the Bulldogs in check.

In the fifth Florida rallied.  Ocasio got things started with a lead off single. Nicole DeWitt earned a single before Aubree Munro and Taylore Fuller were both hit by pitches to score Ocasio and tie the game. An Amanda Lorenz ground out scored DeWitt, giving the Gators a 2-1 lead.   Despite having the Bulldogs on the ropes for one of the few times offensively in the series, the Gators were only able to scratch out those two runs in the inning.

Gator senior Aubree Munro says that Florida was never comfortable with the small lead.  UGA pitcher Chelsea Wilkinson, who pitched both games for the Bulldogs, continued to hold the Gator offense in check.

But it looked like the 2-1 lead might hold up until the bottom of the seventh inning.  Ocasio had retired 16 straight UGA hitters until Maeve McGuire hit a ball in the infield and was credited with a single when the throw from shortstop Alex Voss pulled first baseman Taylor Schwarz off the bag.  It came down to two outs in the inning when the Bulldogs sent Kaylee Puailoa, a left handed hitter to face Ocasio, to the plate as a pinch hitter.  With two strikes on her, Puailoa hit a two run homer to center field as the stunned Gator sold out crowd watched in disbelief.

Just like that, Florida’s season was over and Georgia advanced to the College World Series for the first time since 2010.

As good as Florida was for the entire season, the bats going silent (1 for 9 with runners in scoring position and a .145 average) helped seal the Gator fate in this Super Regional.

Despite the loss, Florida head coach Tim Walton says he is very proud of his team and graduating seniors for what they accomplished throughout their careers.

VIDEO: Check out the highlights from Florida's game against Georgia on Friday.