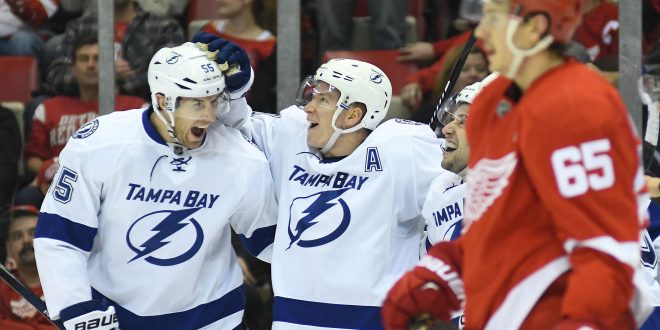 The Tampa Bay Lightning(10-6-1) and Florida Panthers(8-7-1) both emerged with late victories last night. Tampa is now tied for second and Florida is tied for fifth in the Atlantic division.

Tampa took care of business against the Detroit Red Wings, winning 4-3 for their second win in two nights. Nikita Kucherov scored his second goal of the game to break a 3-3 tie with 1:10 remaining in the third period.

Steven Stamkos scored early, his ninth goal of the year, but left midway through the first with a leg injury. After the game, Lightning head coach Jon Cooper said he hopes the injury is minor.

Nikita Nesterov also scored on a power play in the third, his first goal of the year in what was the fifth win in eight games for Tampa Bay. Goalie Ben Bishop made 25 saves against 28 shots.

Florida needed a bit of luck to defeat Montreal and goalie Carey Price. The game winner snuck by Price on a broken-stick slap shot by Aaron Ekblad.

The 4-3 win is only the Panthers second road victory to date. Ekblad said it was a good win for the team in what was the first of four games away from home for Florida.

Denis Malgin(4), Kyle Rau(2) and Alex Petrovic(1) accounted for the three goals prior to the decisive score by Ekblad(3). Roberto Luongo made 34 saves on 37 shots. He made 21 of the 34 saves in the second period. The Panthers win handed Montreal their first home loss of the year. They had won ten straight.

I'm an above-average golfer with surprisingly great touch around the greens. Click on my twitter link for some sports talk.
@Ry_McGinn
Previous Miami Heat On Slippery Slope, Lose 6th Straight Game
Next Buchholz Bobcats Take On Bartram Trail Bears In Second Round of Playoffs